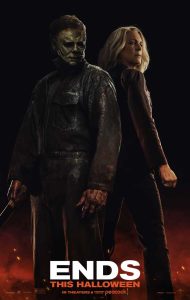 All things come to an end.

That’s to be determined.

Nevertheless, “Halloween Ends” does tie up some loose ends in this current great and gory trilogy and is subsequently better than “Halloween Kills.”

The infamous Michael Myers has haunted the town of Haddonfield, Ill. for decades.

But they do so in a way that makes them always look over their shoulders.

Those who do not participate in the Halloween festivities often make sure they are locked in tight at their homes so no outside evil can enter their peaceful domain.

Even children that were not alive when Michael Myers began his annual reign of terror, know of the danger that Halloween can bring to Haddonfield.

But do not get it twisted.

Often, the adults are more afraid of Michael Myers’ violence than the youngsters that look to them for protection and peace.

In “Halloween Ends,” Jeremy’s mother lets Corey know that her son sometimes has bad dreams that make him talk in his sleep and wet the bed.

Therefore, when many non-trick or treaters partake in horror movies on Halloween night, Jeremy’s mother makes it quite clear to Corey that her son should not be allowed to watch the television.

But as children often do, Jeremy, with a little help from his “ugly boy babysitter” as Jeremy calls Corey, defies his mother’s wishes and partakes in a little horror.

Unfortunately, horror movies at home with an unaccounted-for Michael Myers does not make a good combination.

Like clockwork in a “Halloween” movie, locked doors are suddenly wide open, strange noises are heard from every nook and cranny in the house, and Jeremy disappears without a trace.

Unfortunately, a tragedy occurs at the home while Corey babysits Jeremy, which changes lives forever.

In “Halloween Ends,” Haddonfield has a horrific killer to deal with.

But that does not lead to the residents having more empathy for their fellow man.

In Haddonfield, residents worry about one particular person or thing on Oct. 31.

However, the other 364 days of the year now are dedicated to tormenting another member of their community.

In “Halloween Ends,” Corey is the definition of a tortured soul.

He is bullied by everyone in the community from the elders to the youngsters.

The only people in the town that do not look down on or abuse Corey is Allyson (Andi Matichak, “Halloween”) and her grandmother, Laurie Strode (Jamie Lee Curtis, “Knives Out”).

They see a person that has a heart of gold that was just put in a bad situation.

In fact, Laurie and Allyson meet Corey after he suffers a severe injury at the hands of some juvenile delinquents at the local gas station and convenient store.

Slowly but surely, Allyson’s appreciation for Corey helps him come out of his shell.

Instead of reliving the tragedy of Halloween 2019, Allyson gets Corey to party, drink and dance at a Halloween costume party.

Unfortunately, he can never truly escape the tragedy that happened to him in 2019.

And he can never truly escape the local bullies who are intent on making his life a living hell.

After getting jumped one last time in “Halloween Ends,” Corey has a chance encounter with the sinister Michael Myers himself.

But instead of killing Corey like he has done to so many Haddonfield locals, Michael allows Corey to live.

However, the Corey that existed before his run-in with the psycho killer known as Michael Myers is not the same Corey that exits after the encounter on that fateful Halloween night.

The innocence in Corey’s eyes is gone.

The kindheartedness is gone.

The meekness is gone.

What is present is someone totally different than the town’s punching bag.

And when a bullying victim gets tired of being bullied, all you know what often breaks loose.

A wise man once said hell has no fury like a woman scorn.

The same thing can be said about men before they grow a pair.

And while one can understand the transformation of Corey in “Halloween Ends,” that does not mean they have to like Corey’s character arc.

At the beginning of “Halloween Ends,” Corey is such a likable character and one audiences will empathize and sympathize with.

But he goes from zero to 100 so fast in “Halloween Ends,” that people’s fondness of Corey will end long before Halloween ends.

And although the “Halloween” franchise needs some new blood, the franchise was built on the blood shed at the hands of Michael Myers.

Many audience members will leave upset that “Halloween Ends” does not include more of Michael Myers.

The scariest moments in “Halloween Ends” occur between Corey and Jeremy.

Nevertheless, this particular “Halloween” trilogy ends on a high note.

Will there be more installments of the “Halloween” franchise?

But if so, a new take on the franchise is needed as this one comes to an end.

Unfortunately, all good things come to an end.

But that does not mean that more horror cannot be resurrected from what fans might think is dead.