Movie Review: ‘Godzilla vs. Kong’ Most Titanic Versus Yet 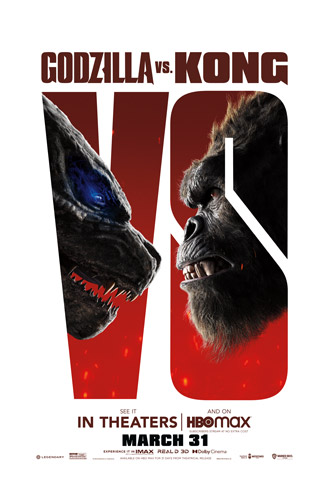 During the pandemic and quarantine, the “Verzuz” battles have taken urban America by storm.

Titanic music producers Timbaland and Swizz Beatz created the “Verzuz” platform that pits hip-hop, R&B and gospel artists in a battle of the bands, streaming online via Instagram, Apple TV and now Triller.

But “Godzilla vs. Kong” might be the ultimate versus because the competitors are the ultimate titans and their battle is to the death as opposed to the mostly friendly (cough, Jeezy vs. Gucci Mane) competitions of “Verzuz.”

In “Godzilla vs. Kong,” scientists have the giant titan King Kong contained in a habitat that he has begun to outgrow.

Sure, the contained space keeps him safe.

They do not feel like themselves unless they can live in their natural habitat.

However, the scientists desperately want to keep King Kong safe by keeping him away from his nemesis, Godzilla.

King Kong and Godzilla’s ancestors have battled since the beginning of time, and if scientists move him from his containment, Godzilla might come after him.

And if something bad happens to King Kong, who will protect the people of the Earth from Godzilla because the world cannot handle two titans at the same time?

Despite the beef between Godzilla and King Kong, Godzilla has not attacked mankind unprovoked in quite sometime.

Unfortunately, that all changes when Godzilla attacks the Pensacola, Fla. campus of APEX Cybernetics, causing massive destruction to people and property.

While APEX appears to be a solid company, not everyone is convinced that the company is doing everything ethically, morally or legally.

APEX engineer Bernie Hayes (Brian Tyree Henry, “Joker”) is so convinced that APEX is doing something off the books that he has created his own podcast called Titan Truth Podcast so that he can blow the whistle on his employer.

The Titan Truth Podcast has found a loyal following of conspiracy theorists like Madison Russell (Millie Bobby Brown, “Godzilla: King of the Monsters”) who is on a mission to meet Bernie and help him expose APEX and all of their shenanigans.

But the biggest mission in “Godzilla vs. Kong,” is getting King Kong out of containment on the grounds of APEX’s Pensacola, Fla. campus, and get him back into his natural habitat without provoking his archenemy, Godzilla.

However, the mission to get King Kong back home is not a totally unselfish attempt.

The people of APEX want to get King Kong back home because if they can, they can get to the Hollow Earth of Antarctica to find the energy or life force that can be used to defeat Godzilla forever.

As expected, the trip to Hollow Earth does not go as planned and the ultimate clash of the titans ensues like a multiple round championship boxing or mixed martial arts fight.

Does King Kong survive or does Godzilla survive?

Furthermore, what impact does the death match have on the people of the Earth?

The fighting scenes in “Godzilla vs. Kong” are epic as expected.

Several scenes in Hong Kong are absolutely beautiful with all of the colorful lights illuminating from the downtown skyscrapers.

However, that beauty does not enjoy much longevity in “Godzilla vs. Kong” because it does not take long for the heated rivals to snap those skyscrapers in half like tiny toothpicks.

But while a typical fight to the death in “Godzilla vs. Kong” would have epitomized the word predictable, thanks to some conspiracy theories actually containing some truth, “Godzilla vs. Kong” has some twists and turns that keep the storyline going.

While the battles between Godzilla and Kong are what many people will want to see, “Godzilla vs. Kong” has its heartfelt moments thanks to the character, Jia (Kaylee Hottle).

Jia, who speaks via sign language because of a hearing impairment, develops a trusting friendship with King Kong.

Although King Kong does not trust the scientists at APEX, he does trust Jia.

The young girl is able to communicate with King Kong somehow.

While others are scared to get close to the titan, Jia can interact with King Kong in close proximity, and get him to understand and trust the mission that APEX has to get him back to Hollow Earth.

His petrified and nervous performance as Bernie would epitomize crazy conspiracy theorists.

But many geniuses are called crazy before people realize that they know what they are talking about.

All Bernie needs in “Godzilla vs. Kong” is for someone to take his theories seriously and he finds that in the form of two teenagers who put their lives on the line to help save King Kong and expose a nefarious company.

Like many action films, “Godzilla vs. Kong” has more than one antagonist.

Obviously, Kong is the ultimate nemesis.

In “Godzilla vs. Kong,” the ultimate nemesis in the film might be Walter Simmons of APEX and his daughter Maya Simmons.

While a stereotypical nemesis might look big and evil like Godzilla, the biggest evil in the world might look normal and innocent from the outside looking in.

Unfortunately, “Godzilla vs. Kong” is a fight to the death.

Therefore, is this the last installment in the franchises of films that include these two titans?

If it is the end of the road, “Godzilla vs. Kong” will go down as the ultimate versus of the pandemic and it might be the perfect film to watch now that the big screens are finally opening back up.