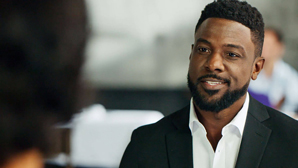 The gangster flick “Dutch” has potential.

And although “Dutch” has an interesting, but not spectacular storyline, the movie leaves much to be desired.

Nevertheless, “Dutch” is still a decent watch, but more in the realm of a television movie, and not a theatrical release.

In the film, Bernard “Dutch” James (Lance Gross) did not grow up with a silver spoon in his mouth.

Stereotypically, his father did not play a role in his upbringing and his mother Delores Murphy (Macy Gray) struggled to keep food on the table and a roof over their heads.

As a result, at an age in which many children spend their time playing little league sports or video games, Young Dutch (JJ Batteast) spends his time earning some extra cash to help pay the bills at a local New Jersey pizzeria.

While making some extra cash is always a beautiful thing, working at a mostly cash business like a restaurant can present some dangers from local knuckleheads trying to make a quick buck.

When the pizzeria gets held up at gunpoint by a criminal played by comedian Michael Blackson, instead of staying quiet and letting the robber take the money from the cash register, Young Dutch inexplicably informs the robber that the pizzeria owner keeps even more cash in the safe.

What seems to be the ultimate betrayal of a business owner who allowed Young Dutch to work even when he is underage turns out to be a set up to get the criminal to the back of the store so that Young Dutch can kill him.

That act of loyalty towards his boss earns Young Dutch his actual nickname and the respect of the organized crime figures in New Jersey that actually run the pizzeria.

Showing guts as a youngster provides Teen Dutch (Malcolm David Kelley) an opportunity to earn money for the organized crime family from car thefts to the drug game.

Dutch eventually organizes his own crew that works under the wings of the New Jersey mob, which includes Angel (Ferreira Isabella) and Craze (Jeremy Meeks).

However, when Dutch (Gross) gets accused of a heinous crime that does not seem to fit his modus operandi, his reign on top of the New Jersey underworld appears over.

Dutch and his crew are accused of blowing up a police precinct, killing 27 officers.

However, as Dutch interviews potential attorneys to represent him at trial, he tells one potential lawyer that he is not guilty of the accused crime and that race has played a role in the charges against him.

Michelle, one of the best attorneys in the business, takes Dutch’s case.

Nevertheless, the odds remain stacked against her client because overcoming charges of murdering 27 police officers is an extremely steep hill to climb.

The polarizing aspects of “Dutch” are the courtroom testimony scenes.

Instead of letting the witnesses just verbally express their testimony, “Dutch” flashes back to those past scenes, allowing them to play out visually, which works because seeing something play out on screen is always better than just hearing about it.

However, the flashback scenes sometimes get a little confusing because it makes the film seem chopped up in a way that is similar to the film, “Get on Up.”

And although Michele is presented as a hotshot lawyer from Harvard University, she does not do a great job of showing that her client is innocent of the crime he is accused of.

Furthermore, as Michelle (Natasha Marc) states, the defense only presents circumstantial evidence of Dutch’s guilt, meaning neither side really proves their case.

But despite the shortcomings, a few things like several performances and an explosive ending makes “Dutch” a decent watch.

To see Gross play a certified gangster in “Dutch” is great.

Gross plays Dutch with such a regal grace, without overacting, that it makes it hard to cheer against him even though moviegoers know of his nefarious past as a career criminal.

The character Dutch is a new school gangster with old school swagger.

However, back in the glory years of organized crime, gangsters wore the best suits, drove the most expensive cars and could mix and mingle with the classiest people in the business and entertainment world.

Gross brings that type of elegance and style that once was commonplace in gangster movies like “The Godfather” trilogy and “Goodfellas.”

Furthermore, “Dutch” boasts of a who’s who of Black Hollywood like Tyrin Turner (Menace II Society) who plays the pimp Sugar Ray, rapper O.T. Genasis who plays drug kingpin Kazami and rapper Fabolous who appears in a cameo musical performance.

Unfortunately, since the gangster movie genre has gotten inundated over recent years, a filmmaker has to do something spectacular to stand out in a crowded field of great cinematic achievements.

And other than Gross, Gray, Turner and a couple of other actors, the acting performances in “Dutch” need a little improvement.

Meeks, who rose to fame when his mug shot went viral in 2018, did a decent, but not spectacular job.

Nevertheless, he has enough talent to find consisting acting work in the coming years.

But filmmakers should have paid a little more detail to the storyline and even the opening credits in “Dutch.”

The script could have been better.

Nevertheless, “Dutch” does have potential and it is potentially enjoyable because of the performances by Gross and Gray.

“Dutch” is now playing in select theaters in Houston.