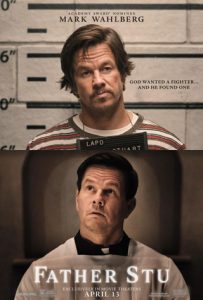 Many men will relate to Stuart (Mark Wahlberg, “Deepwater Horizon”).

You remember the time you pretended to be interested in something that you were not interested in like the opera, ballet or ice skating just to impress a young lady.

Well, Stuart Long just takes it a step farther pretending to be a Catholic just to impress a Catholic girl who clearly can see through his charade.

However, the thing about God is he can take your frivolous behavior, or anything else for that matter, to save your soul and turn you into a disciple of Christ.

In the inspirational movie “Father Stu,” Stuart is basically a screw up who cannot get his life together.

You know the person that is chasing some pipe dream well past their prime instead of getting a job.

In “Tyler Perry’s Daddy’s Little Girls,” it was Forty P (Craig Robinson) trying to launch his rap career at 40 years old while hoping that his lady would pay for their dinner date because she had a high-paying job as an attorney.

In “Father Stu,” Stuart has dedicated his entire life to pursuing a boxing career and has no plans of giving in either despite not having any sponsors or no real shot at the big time.

His boxing career has even started to cause some health concerns, which he chooses to ignore despite the doctor’s warning.

When Stuart’s mother (Jacki Weaver, “Silver Linings Playbook”) finally convinces him to find a new passion or goal, out of nowhere he decides to move to Hollywood to pursue an acting career even though he is up in age to be just starting that pursuit.

Anyone who has ever visited Los Angeles can attest that everyone in the area is some sort of entertainer, even if their day job is waiting tables or working as a bartender.

When Stuart arrives in Los Angeles, he finds a shabby motel without a working television in his room and a job in the meat department of a grocery store.

While waiting on customers, he never waits or hesitates to tell people about his acting dreams, asking every customer if they are connected to the entertainment business in some form or fashion.

When Stuart finally does get an audition, he is almost victimized by Hollywood’s infamous casting couch.

And when his breakthrough ultimately occurs, he is limited to wack commercials that air during soap operas, not the big movie roles he had envisioned.

Therefore, it is back to the grocery store for Stuart.

Although working at a grocery store was not Stuart’s ultimate goal when he arrived in Los Angeles, his spirits rise when a beautiful young lady (Teresa Ruiz, “Narcos: Mexico”) visits the store looking to purchase fish.

Despite becoming immediately smitten, the apple of Stuart’s eye does not see him in the same way that he sees her.

She has no interest in him.

She can see through his façade.

But that does not stop him from pursuing her.

When Stuart finds out that the young lady posted a flyer at the grocery store for her church, Stuart immediately becomes an avid churchgoer even though he does not believe half of what the priest says.

But something happens when one comes into the Lord’s presence.

The Word begins to convict a person’s heart.

Often, skeptics give their lives to Jesus Christ after learning about the gospel.

However, very few probably go from being skeptic or nonbeliever to automatically being called to the ministry or pulpit.

Nevertheless, that’s what happens to Stuart.

He decides that God is calling him to become a priest even though no one in the Catholic church or his family takes him seriously.

When Stuart tells his mother that he is going to be a priest, his mother’s response is, “for Halloween?”

Stuart’s skeptics say that Stuart becoming a priest is like Adolf Hitler joining the Anti-Defamation League.

But as many Christians find out, becoming a vessel for God does not mean living happily ever after.

Becoming a soldier on the battlefield for the Lord sometimes means Christians will fight some of their hardest battles after salvation and after their calling.

But often those battles are the reasons why Christians can reach those who are experiencing similar trials and tribulations.

Although “Father Stu” is nothing out of the ordinary cinematically, Stuart’s life is not ordinary when one thinks about how far he came and changed in such a short period of time.

Even though Stuart initially begins attending church just to impress a young lady, there is nothing fake about his sincerity when it eventually comes to ministry.

And the fight that Stuart has when it comes to handling life’s adversities is nothing short of inspiring.

“Father Stu” benefits from amusing and comical dialogue, often coming from the mouth of Stuart.

Unfortunately, “Father Stu” drags a little bit at the beginning of the film before it gets to the good stuff.

But “Father Stu” shows that fraudulent Christians cannot fake the funk because true Christians can point out those fake prophets from many miles away.

More importantly, when Christ really touches a person, the true love and dedication that a disciple for Christ possess cannot be faked.

And those people who do not believe that a person has truly been born again cannot stop that person from fulfilling God’s purpose for their life.