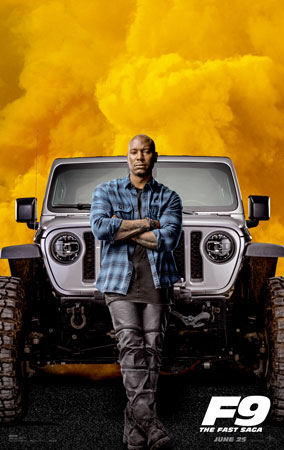 Leaving on top seems rare in the entertainment industry.

As controversial as he is now, Bill Cosby left “The Cosby Show” while on top.

Hall of Fame running back Jerome Bettis left the gridiron after helping the Pittsburgh Steelers win the Super Bowl in Bettis’ hometown of Detroit.

Unfortunately, the once powerful “Fast and Furious” franchise might have failed to ascertain when to exit stage left because “F9: The Fast Saga” runs out of gas early in the movie.

And while the franchise became outrageous and outlandish years ago, “F9: The Fast Saga” might have taken the ridiculousness too far.

The movie “F9: The Fast Saga” is not an exit because the 1oth and 11th installments are already in the works.

Therefore, there is hope for a franchise rebound in the future.

“F9: The Fast Saga” essentially begins as “The Fate of the Furious” began, with Dom (Vin Diesel) trying to retire from his previous life.

But before his unretirement, “F9: The Fast Saga” flashes back to Dom’s early years working with his racecar driver father in 1989.

Along with his brother Jacob, Dom works on his father’s pit team, fixing issues with the car during races.

But after one fateful pit stop, Dom’s father’s car explodes after getting clipped in the rear by a rival driver.

The sick and twisted turn of fate turns Dom from the future golden boy of race drivers to a convicted criminal.

When the rival driver who caused his father’s accident makes a heartless remark, Dom proceeds to beat him viciously, landing him time behind bars.

While behind the fences, he learns that his father’s death might not have been accidental at all.

Furthermore, the accident might not have been caused by the rival driver at all.

When Dom gets out of prison, he confronts Jacob about their father’s death and the beef that occurs between the two severs their brotherly bond for decades.

The next time Dom sees Jacob (John Cena), he is leading an overseas Army of assassins hellbent on bringing Dom and his crew to their knees.

In fact, Jacob is not merely concerned with bringing Dom’s crew to their knees.

He is also hellbent on bringing the world to its knees and exerting his dominance over everything and everyone on the globe.

Someone has hijacked Mr. Nobody’s plane and taken Cipher (Charlize Theron) from his custody.

Mr. Nobody wants Dom to reassemble the crew to save him and save something even more valuable.

Dom is initially uninterested in working again because he is enjoying raising his son in peace with Letty.

But when Letty decides to get back in the game with Tej and Roman, Dom relents and boards the plane to help Mr. Nobody.

When the crew arrives overseas, they find no sign of Mr. Nobody and Cipher in the physical form.

However, they do find a safe that probably contains something that Mr. Nobody wanted nobody to find but them.

Ramsey is a able to crack the safe.

She finds half of a rare jewel named Aries.

If the other half of Aries is discovered and put with the first half, it would allow the possessor to control all the weapons around the world.

Furthermore, Aries allows the possessor to control every grid in the universe like electricity grids and Internet.

The person that possesses such a powerful object would in effect control the universe.

And if placed in the wrong hands, the world as they know it could cease to exist, and a new world order would take its place.

What ensues in “F9: The Fast Saga” is the norm.

Inexplicable events that defy the laws of physics and common sense.

And not the best acting in the world.

Despite the predictable formula in the previous eight Fast films, apart from “The Fast and the Furious: Tokyo Drift,” the films still seemed to entertain because moviegoers do not go to action films for the realistic.

Many moviegoers attend action movies because of the energy and excitement they provide, despite being totally unrealistic.

However, “F9: The Fast Saga” takes the unrealistic thing to new lows.

If anyone in their right mind thinks that human beings can propel themselves into outer space with a rocket attached to a Pontiac to destroy a satellite, they are off their rocker.

In “F9: The Fast Saga,” Roman even pokes fun at the fact that Dom’s crew has found themselves in extremely dangerous, violent and volatile situations and always escaped without a scratch.

The crew’s adversaries seem to shoot everything except them in the film.

The bullets seem to always land next to them and not in them for some reason.

Even when a tank seems to fall on Roman, he walks away without a scrape.

Nevertheless, “F9: The Fast Saga” is cool because it brings back some familiar faces from past installments because, just like in a soap opera, death is not permanent in the “Fast and Furious franchise.”

But despite that fact, it is time that the studio begins to think about ways to get the franchise back on track before its eventual exit leaves fans with a bad taste in their mouths.

The 10th and 11th installment are already greenlit and will feature rapper Cardi B, who appears in the ninth installment, in the 10th film as well.

If the ninth film was the last, the franchise would not have left out on top.

Hopefully, the 10th and the 11th versions could be the charms and if they are, the franchise would have made enough fans and funds to enjoy a lucrative retirement.