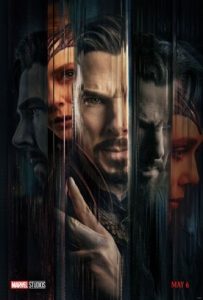 Do you think life exists in other realms like other planets, galaxies and/or universes?

What if a lifeform existed in other universes, but those lifeforms were direct replicas of life in this universe?

Well, what if a person lost something that meant the world to them in this universe, but had the ability to reconnect with their past by somehow getting to those other universes?

In “Doctor Strange in the Multiverse of Madness,” Dr. Stephen Strange (Benedict Cumberbatch) is tasked with saving the multiverse from catastrophe by protecting the one person with the power to travel seamlessly through the multiverse.

America Chavez (Xochitl Gomez) has kept popping up in Stephen’s daily life in “Doctor Strange in the Multiverse of Madness.”

In “Doctor Strange in the Multiverse of Madness,” Stephen wakes up suddenly after experiencing a bad dream in which he could not save America from a beast chasing her to take her superpowers from her.

Even when Stephen goes to the wedding of his ex-girlfriend Christine (Rachel McAdams), he cannot escape America, even though the two have never even met.

While the wedding guests attempt to enjoy Christine and her lucky groom’s reception, a beast from some other world begins terrorizing the streets of the city.

Almost immediately, Dr. Strange, with some help from Wong (Benedict Wong), springs into action to save the world from evil forces like any good superhero would do.

However, when Stephen sees America in the flesh, he knows something weird is occurring and he has not just been having bad dreams.

Just like in his “dream,” a giant beast is chasing America through a universe attempting to take her superpower from her.

After defeating the giant monster, and rescuing America from danger, she explains to Stephen and Wong that Stephen has not been experiencing dreams at all.

He has experienced life in other universes.

In “Doctor Strange in the Multiverse of Madness,” America is the only being who can jump from universe to universe.

Unfortunately, her power is a blessing and a curse.

America has not yet mastered her superpower or learned how to control her strength.

But those with superpowers of their own have decided to stop at nothing to take those powers so that they can enjoy the benefits of travelling to and from various universes.

In “Doctor Strange in the Multiverse of Madness,” the only person that Stephen can think of that can help America is Wanda Maximoff (Elizabeth Olson).

In “Doctor Strange in the Multiverse of Madness,” Wanda has never overcome the loss of her two sons.

She is miserable without her boys.

But the fact that she still has her sons in another universe motivates her to take America’s power of traveling through the multiverse and using it to reunite with her boys, by any means necessary.

Wanda wants to take the powers with as little damage done as possible.

But if Wanda must get nasty and bring the smoke, she has no problem going scorched Earth to get what the heck she wants.

“Doctor Strange in the Multiverse of Madness” is equally dope and dark.

The darkness kind of gives it an old D.C. Comics feel, instead of some of the lighter, happy-go-lucky Marvel films.

Seemingly, the two rival comic book franchises have begun to come together when it comes to the tone of their films.

For years, Marvel clearly had a huge lead against its D.C. counterparts.

However, that gulf is now narrowing.

As to be expected, “Doctor Strange in the Multiverse of Madness” has stunning visuals with a wide array of colors to go with the changing moods.

When Wanda goes into her evil bag, expect fiery and hell-like reds.

But when Doctor Strange tries to stop evil, expect to see some brighter hues.

Unfortunately, “Doctor Strange in the Multiverse of Madness” brings nothing different to the superhero movie storyline.

Many of them, obviously, have the same storyline.

In superhero movies, the superheroes must save the world from the supervillains.

And usually, the superheroes win, and the world is saved for the time being.

But despite having the same plot, superhero movies shine plot wise because the world will always have to deal with evil that threatens to tear the world apart and end life as people know it.

That reality happens in real life, to a much less cinematic extent. But it does happen (i.e. Putin’s war in Ukraine), without the superheroes saving the day.

But one could say that evil dictators like Vladimir Putin are truly supervillains, while the regular citizens of Ukraine fighting to defend their country are the real superheroes.

While superhero movies should definitely not be compared with real-life genocide, art does imitate life, even though truly creative people often take real life to another dimension with their art.

And that is exactly what Marvel has done with its seemingly unstoppable brand.

Yes, the storylines get redundant.

And yes, actors become household names because of their appearances in superhero movies.

But movies succeed often because people can relate to the stories or the things that appear in movies are things that people have imagined for generations like life in other galaxies.

And how that life compares to life closer to home.