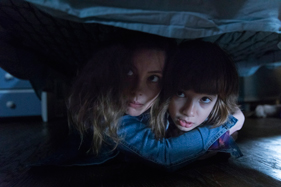 Finally, horror movie fans get a film without a creepy doll.

However, enough horror movies involve the formulaic and cliché doll that it seems that all horror movies stick to the same script.

With “Come Play,” horror movies ceremoniously enter the 2020s decade with creepy tablets and flat screens in the place of those aforementioned dolls.

Sure, as a person gets older being different becomes an advantage because it allows a person to stand out from the crowd.

But for children, being different can lead to being outcasts or the victims of bullies.

He cannot talk, and has to communicate via a computer tablet that allows the computer’s speaker to talk for him.

Although the tablet allows Oliver some ways to communicate, he has become too dependent on technology and computer devices.

He spends most of days watching “SpongeBob” on the tablet.

Oliver has no friends anymore, which obviously has the potential of stunting his social development.

While parents place much emphasis on a child’s intellectual and physical development, developing social skills is just as important in the full development of a productive human being.

Oliver had a close friend in Byron (Winslow Fegley).

But unfortunately, a physical encounter between Byron and Oliver, coupled with the ending of their mothers’ friendship, causes the relationship to dissolve quickly.

Byron does not just cease being Oliver’s friend.

He teams up with Mateo (Jayden Marine) and Zach (Gavin MacIver-Wright), and begins bullying Oliver relentlessly, even going as far as attempting to toss his beloved computer tablet.

The bullies even give Oliver the nickname “Moaner Boner,” because he moans when he tries to speak.

While school could lead to anxiety for some children because of bullying, many find a safe haven at home.

Unfortunately, Oliver does not even enjoy much comfort at home.

She will drop everything to help Oliver navigate life.

However, Oliver rarely even acknowledges her presence, choosing to focus on his tablet instead of looking her in the eyes when she speaks to him.

Nevertheless, Sarah takes Oliver’s condition seriously, taking him to speech therapy class and constantly trying to provide him the companionship he needs during his formative years.

Despite his mother’s tender loving care, Oliver seems to have a stronger connection with his father, Marty (John Gallagher Jr., “Underwater”).

He skips out on speech therapy sessions, and any other parental obligation if he can.

Marty works as a tollbooth operator.

For some reason, this tollbooth has a lost and found as if drivers are attempting to pay their fare with merchandise instead of money.

Nevertheless, the tollbooth has some interesting items.

Therefore, when Marty finds a lost tablet in the lost and found, he brings it home to his son.

In “Come Play,” Oliver takes an immediate liking to his “new” tablet, even though he already has one of his own.

He takes it to his bedroom to discover all of the new cool apps he has that he did not have on his old tablet.

While playing with his new tablet, Oliver stumbles across the eBook, “Misunderstood Monsters.”

The main character of the book is a monster named Larry who does not have any friends like Oliver.

As Oliver turns the pages of the eBook, strange and mysterious things begin to occur at his house like the electricity going out.

Oliver begins to believe that someone or something has gotten into the family home even though his parents try to assure him that he is just having nightmares.

Making the matter even scarier for Oliver is the fact that he cannot fully articulate what he believes is happening in their home to his parents.

Somehow, Sarah convinces Byron’s mother to let her son come over for a sleepover because she is getting concerned with Oliver’s lack of friends.

Mateo and Zach come along for the sleepover too even though they think Oliver is a freak and weirdo.

But when the fearsome foursome come together in “Come Play,” all you-know-what breaks out because of the odd little tablet that Marty brought home for his son.

“Come Play” is a pretty solid movie for a date night on Halloween.

Actually, “Come Play” might present the only adult themed Halloween activity for people to get into because social distancing does not lend itself well to Halloween parties.

The only good thing about a possible 2020 Halloween party is that a costume could provide a mask, which is like killing two birds with one stone.

But if that one stone does not kill or prevent the coronavirus stone, adults could find themselves up a creek without a paddle during this pandemic.

The storyline and outcome of “Come Play” is not groundbreaking.

Furthermore, Robertson has to get some love for his portrayal of the mute, Oliver.

No, Robertson’s performance is not groundbreaking in “Come Play.”

But for a character to resonate emotionally with audiences without mumbling a word takes a good performance.

And more importantly, Robertson delivers a strong performance without the assistance of one of those strange and creepy Hollywood horror dolls.