Movie Review: ‘Copshop’ Leaves Much to be Desired 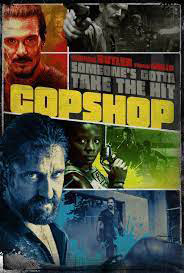 Often, when a person watches a movie twice it is because of how good the film is.

However, sometimes people must watch a movie twice or three times to see if they missed something important that would change their opinion of the picture.

With “Copshop,” moviegoers might have to watch the movie more than once to see if they missed some important elements.

Unfortunately, after watching “Copshop” for the second or third time, it becomes clear that the movie just does not fully develop its storyline, instead relying too heavily on nonstop violence.

Furthermore, it proves people will do strange things when they are in fear.

In “Copshop,” Teddy Murretto (Frank Grillo, “The Purge: Anarchy”) gets arrested when he sucker punches a police officer outside of a rowdy wedding at a Nevada casino.

While police officers are not always popular in America, and rap groups like N.W.A even yelled “F the police,” it is never wise to assault a police officer.

Nevertheless, Teddy does it anyway when he attempts to knock out Officer Valerie Young (Alexis Louder, “The Tomorrow War”).

Although it probably takes a horrible person to assault a police officer, especially unprovoked, Young soon finds out that there is more than meets the eye when it comes to Teddy.

He commits a violent act against a police officer.

However, he does not come across as a brutally violent individual.

It is as if Teddy tried to get arrested on purpose.

But why would someone want to voluntarily spend time behind bars?

But what happens when the criminals who want Teddy dead realize the game he is playing and commit their own fake crime just so that they can be housed in the same jailhouse as their mark, Teddy.

In “Copshop,” just when Teddy thought he was safe from his would-be assassins, up jumps the devil in the form of hitman Bob Viddick (Gerard Butler, “Angel Has Fallen”).

Bob gets arrested for drunk driving after he “accidentally” slams his car into an abandoned Crown Victoria on a deserted Nevada road.

Cops on the scene investigating the abandoned car, which has multiple bullet holes in it, almost get run over by Bob’s car.

The lucky cops, who avoided Bob’s oncoming car, immediately arrest Bob when he gets out of his wrecked car and stumbles down the deserted road.

Bob, however, has no identification on him.

Therefore, police officers list him as John Doe in the police records.

When police officers take Bob to the holding cell, he attempts to get into the cell with the recently incarcerated, Teddy.

However, police officers place Bob in the cell directly across from Teddy.

Suddenly, Bob is extremely sober as he begins to question Teddy about why he is behind bars.

When Teddy tells Bob that he got arrested for punching Young, Bob responds to Teddy by telling him that is not the only reason he is behind bars.

Bob knows all the dirt surrounding Teddy’s incarceration and why Teddy purposefully got arrested.

Unfortunately, Teddy has so many enemies that he has more than one organization aiming for his head in “Copshop.”

In “Copshop,” Teddy is a mover and a shaker in the Las Vegas political scene, as well as the Vegas gaming industry.

Young calls him a fixer when Teddy begins to tell her about his past.

However, Teddy hates the term fixer.

But whatever Teddy calls his profession, it definitely comes with perks because he has gotten arrested 22 times.

However, Teddy has no convictions on his record.

That suggests that Teddy has relationships with people very connected within the judicial system.

Within the Las Vegas gaming and political system, Teddy’s job is to bring people together and to make sure all the big wigs remain happy.

However, when the Nevada attorney general gets murdered in his office, the people that Teddy had kept happy become very unhappy at him.

As a result, his life and the lives of his relatives could have been in danger if he had not come up with a solution with the quickness.

However, real gangsters and crooked politicians can get to a mark, even if the mark sits behind the fences of a jailhouse.

So, is Teddy truly safe in “Copshop?”

Furthermore, are police officers like Young safe, even as they sit inside of a police station?

Frankly, “Copshop” is not it.

Sure, “Copshop” is watchable.

However, the movie leaves much to be desired.

First and foremost, Teddy’s backstory with the politicians and leaders of the Las Vegas gaming industry should have gotten developed more in the film.

“Copshop” includes flashback scenes as it pertains to the assassination of the Nevada attorney general.

However, not enough information is provided in “Copshop” to explain why two organizations so desperately want Teddy eliminated.

In “Copshop,” Bob does explain some of the nefarious things that Teddy is accused of.

However, not enough detail is provided.

With a movie that clocks in at one hour and 48 minutes, filmmakers had enough time to give more of the backstory surrounding Teddy.

Fortunately for “Copshop,” there is a segment of the movie going public that just likes gratuitous violence.

They will be pleased with “Copshop,” and might even watch it more than once.

For others, the second time around will not be any better than the first time.