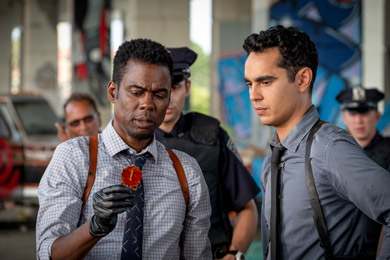 To some, Chris R0ck belongs on the Mount Rushmore of 20th century standup comedians.

But when one has established himself or herself in the comedy realm, it becomes difficult to take them seriously in the dramatic, suspense or horror realms.

In “Spiral,” Rock does not do a bad job as a police detective searching for a serial killer who is exterminating police officers.

It is just that moviegoers have gotten accustomed to many comedians turning out to be great dramatic actors and Rock does not measure up to that level just yet.

It is hard to see David Mann as anything but Mr. Brown from Tyler Perry movies, plays and television shows.

And it is hard to see someone like Chris Tucker as anybody else than loudmouths like Smokey from “Friday” or Detective Carter from the “Rush Hour” franchise.

But every now and then a comedian is so versatile that comedy cannot hold them back from greatness in other genres.

Eddie Murphy is one of the kings of standup comedy.

But Murphy also killed it in his dramatic role in “Mr. Church.”

Additionally, Jamie Foxx made his name in standup comedy and sketch comedy shows like “In Living Color.”

But the brother is also a bona fide R&B crooner.

Furthermore, he totally became Ray Charles in “Ray” and did his thing in the suspense film, “Collateral.”

Even Kevin Hart showed his dramatic chops in “The Upside” with Bryan Cranston.

The star of “New Jack City” and “Top Five” does a halfway decent job, but does not reach the bar set by his peers.

In “Spiral,” police officer Boz is attending a Fourth of July festival and carnival like many other people in the city.

He is enjoying himself until someone snatches a lady’s purse and takes off with it.

As any officer would do, whether on duty or not, Boz pursues the purse-snatcher, following him into a sewer/subway station.

When police officers find Boz, dead does not describe his state.

Decapitated is a better description than deceased.

Boz’s body is so badly destroyed that police officers initially believe that he is a homeless man that got caught on the train tracks, unable to avoid the brutal collision brought on by an incoming locomotive.

However, when Zeke Banks (Rock) finds a fit bit on the wrist of the deceased man and a wedding ring, he knows that he is not just a homeless man wandering on the train tracks late at night.

Many of Zeke’s colleagues at the metro police department have lost respect for Zeke because a stance he took regarding the death of a civilian.

But Boz never wavered in his respect, support and friendship for Zeke.

Even though Zeke’s father is former police chief Marcus Banks (Samuel L. Jackson), that does not stop other officers from isolating themselves from the former chief’s son.

Even when metro police department officers discover that there is a serial killer targeting police officers loose in “Spiral,” some still cannot even put their disdain away for Zeke to take down the killer.

As a result of forced isolation, Zeke has learned to investigate crimes on his own, without the help of a partner or backup.

However, the peace of solitude comes to an end when Zeke is partnered with rookie detective William Schenk (Max Minghella), a cop fresh out of the police academy.

William became inspired to become a cop because of the work of Zeke’s father, so partnering with Zeke is like a dream come true.

Unfortunately, William could not have picked a more turbulent time to be a cop for several reasons.

As a result of police misconduct and a lack of respect for the metro police department, many cops have become the target of vitriol that has now led to violence.

Since some cops have misused the badge and abused their authority, the town is stalked by a serial killer hell bent on abusing bad officers.

And what compounds the situation is that police misconduct sometimes creates more enemies than a person can count.

First and foremost, “Spiral” is worth a watch.

If a person is a fan of true crime shows, suspense films or horror movies, then “Spiral” is a good way to spend 90 minutes.

However, “Spiral” is beyond gruesome.

Actually, the word grotesque would better describe “Spiral” than gruesome or brutal.

Furthermore, “Spiral” does not try to avoid controversy with its storyline.

Having a film depict a serial killer that is offing bad police officers is definitely a polarizing way to address police abuse or police brutality.

Nevertheless, the timeliness of the topic of police misconduct makes it understandable to center a movie like “Spiral” around.

And although Hollywood has always been predictable and formulaic, the outcome of “Spiral” will definitely come out of leftfield.

But unfortunately, “Spiral” has too much of Rock in a dramatic role and not enough screen time for a true dramatic actor like Jackson.

And while it is admirable that Rock is spreading his wings, his true genius lies in the comedic world and not the dramatic world.