Movie Review: ‘Bullet Train’ Silly by Design; But That Does Not Excuse It 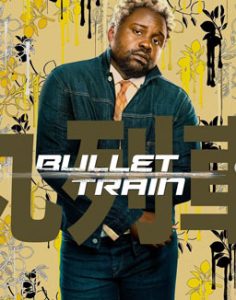 Some movies are meant to be silly.

Every film does not move the movie culture forward or contain life-changing performances by the actors involved.

“Bullet Train” is one of those movies intended to be silly.

However, that reality does not prevent the movie from venturing too far into tomfoolery.

As a result, “Bullet Train” comes off as too buffoonish.

But “Bullet Train” does benefit from the star power of Brad Pitt and several A-list cameo appearances, and that makes it tolerable.

While the natives have controlled the Japanese underworld for years, the gang land is now controlled by an elusive character known only as White Death.

In “Bullet Train,” White Death has hired the twins Lemon (Brian Tyree Henry, “Eternals”) and Tangerine (Aaron Taylor-Johnson, “The King’s Man”) to remove his son from the dangerous predicament he is in, transport him on the bullet train to a safe location, while carrying a briefcase full of money.

On a side note, one twin is Black and the other is White.

Lemon and Tangerine are twins in the same way that Benjamin Buford “Bubba” Blue (Mykelti Williamson) and Forrest Gump (Tom Hanks) were “twins” in the 1994 film, “Forrest Gump.”

Although a Black twin and a White twin should stick out like a sore thumb, no one really knows what Lemon and Tangerine look like.

The duo has a notorious reputation in the streets.

But to look at them, no one would ever think of them as big-time gangsters.

In fact, they must be the dumbest gangsters on the planet because they do not even hold on to the briefcase that contains all the money.

Lemon and Tangerine check it with the rest of the luggage on the bullet train despite the enormous amount of cash in the case.

In “Bullet Train,” Ladybug (Pitt, “Ad Astra”) has received the job of getting on the train and retrieving the briefcase in what should be a simple grab and go operation.

Unlike many of the other gangsters involved in the “Bullet Train” ordeal, Ladybug does not want to resort to violence, which might put him into some precarious situations.

As a matter of fact, Ladybug does not even carry a weapon on the train even though he has the option to do so.

While others react violently when placed in deadly situations, Ladybug wants to take a calmer and more spiritual approach to life and death situations.

Unfortunately, when bullets start flying on a train, calmness and spirituality might have to go by the wayside with the quickness if one wants to survive to fight another day.

Kimura’s son is in the hospital after he mysteriously falls off the roof of a building,

While still in obvious pain because of the dire health of his beloved son, Kimura must deal with the criticism from his father The Elder (Hiroyuki Sanada, “Avengers: Endgame”), who questions how any real father can let this happen to his son.

Additionally, Prince (Joey King) is on the plane.

While the train contains several gangsters and killers, Prince stands out because she is just an innocent little girl who looks incapable of the treacherous and violent behavior that the other passengers are known for.

“Bullet Train” finds success because of the relationships between the characters.

While sibling rivalries are amusing at times, comical is not an attribute one should have when dealing with gangsters, hit men and other hardened criminals.

Furthermore, what true killer is a fan of children’s television programs?

Lemon might have the reputation of a stone-cold killer, but that does not mean he does not have a soft spot for animated shows usually targeting innocent young folks.

While some might laugh at Lemon’s infatuation with cartoons, those shows educate him on reading people and discerning their true motivations and personalities.

In “Bullet Train,” Lemon labels new acquaintances based on characters that resemble their personality traits.

That quirkiness might help Lemon survive the ride from hell in “Bullet Train.”

But the most dangerous person or people often are the ones a person would least expect.

And not knowing who to trust might lead to catching a bullet on the train.

The description of “Bullet Train” on IMDB reads, “Ladybug (Brad Pitt) is an unlikely assassin determined to do his job peacefully after one too many gigs gone off the rails. Fate, however, may have other plans, as Ladybug’s mission puts him on a collision course with lethal adversaries from around the globe-all with connected, yet conflicting, objectives-on the world’s fastest train. The end of the line is just beginning in this non-stop thrill-ride through modern-day Japan.”

Moviegoers will actually love the speed of the trains and the amenities on that train because bullet trains are the future of travel throughout the world.

Many people marvel at how bullet trains will allow people to live and commute in multiple cities without having to deal with long travel times like generations before.

Moviegoers will also marvel at the A-list celebrities that Pitt brings to the table in “Bullet Train.”

Although the movie has enough comical moments, the cameo appearances bring even more humor.

Unfortunately, the humor becomes too foolish, and the scenes become too preposterous even for a movie meant to be silly.