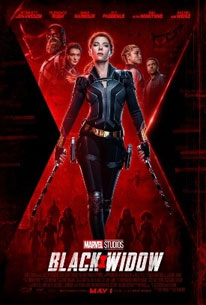 Over the years, Marvel has gotten the reputation for making “real” superhero movies.

To many comic book fans, DC films like “The Joker,” “Batman vs. Superman” and “The Suicide Squad” come across as too dark with not enough superhero action.

But with “Black Widow,” the title alone suggests darkness.

However, that darkness does not deter the dopeness of “Black Widow.”

In the Marvel movie “Black Widow,” Young Natasha Romanoff (Ever Anderson) and her little sister Young Yelena Belova (Violet McGraw) seem to have an idyllic childhood in Ohio with their parents, Melina Vostokoff (Rachel Weisz) and Alexei Shostakov (David Harbour).

Like many children growing up in a safe midwestern town, Young Natasha and Young Yelena enjoy what many kids enjoy and that is playing outside.

After a day of play they look forward to spending their evenings at the dinner table with their parents, talking about how everyone’s day went.

The worst thing that Young Yelena can think of is the fact that she bruised her knee playing with her big sister, but that it stopped hurting moments after her fall.

In “Black Widow,” even when Young Yelena and Young Natasha’s parents experience adult problems, they do their best to shield the children from the harsh realities of real life.

Like “The Pursuit of Happyness” when Chris Gardner (Will Smith) pretended that he and his son Christopher (Jaden Smith) were sleeping in a cave, when in actuality they were sleeping in a public bathroom because of homelessness, Alexei and Melina pretend that they are taking Young Natasha and Young Yelena on adventure when they are really running away from law enforcement officials trying to put them behind bars.

At the spur of the moment, the family must pack their bags, which includes a lot of weapons, and get into their automobile to avoid capture by the authorities.

Young Yelena does not even have time to put shoes on her feet before she must flee her home in Ohio.

With Alexei blasting his gun at law enforcement officials and Melina flying a plane in a desperate getaway, the family makes it to Cuba where they are free from American prosecution.

However, that does not mean that the family is home free.

The girls immediately get separated from their parents.

Additionally, Melina’s health is in grave danger because of the shootout with American law enforcement officials.

And the girls, along with other captured girls, fear what is to come of their lives without the protection of their parents.

In “Black Widow,” it takes the girls over 20 years to see their parents again.

Natasha (Scarlett Johansson) and Yelena (Florence Pugh) even lose contact with each other as they grow into adults.

When the girls get separated from their parents, they find themselves under the spell of a ruthless dictator named Dreykov (Ray Winstone).

Like in many action films or superhero films, Dreykov (the antihero or villain) uses his power in nefarious ways, trying ultimately to control the world with evil.

The girls that he kidnaps become known as widows and they are trained to become savage killers.

Dreykov can accomplish his goals with manipulative mind control over the young girls, almost brainwashing them to become his devilish soldiers.

However, vials of a mind control antidote exist and if Yelena and Natasha can find the mysterious Red Room where Dreykov houses his trained female killers, then they could free the widows from Dreykov’s brainwashing and bring down his reign of terror at the same time.

But in order for Natasha and Yelena to find the elusive Red Room, they must somewhat reconnect with their parents who actually were not the wholesome, loving and supportive parents that they seemed to be in “Black Widow.”

Although “Black Widow” is extremely dark in comparison to other Marvel movies, it does have its comedic moments in which Pugh and Harbour steal the show.

Yelena makes fun of Natasha’s pose in which she bends down and shakes her hair before engaging in superhero battle.

While under the influence of Dreykov, Yelena never got to make decisions for herself, including her wardrobe choices.

Therefore, when she breaks away from Dreykov’s rule and can purchase her own clothes for the first time, she picks a vest with multiple pockets that she could put all types of things into.

Additionally, Alexei’s fascination with Captain America is amusing too.

While in prison, all he talks about is how he went toe-to-toe with Captain America when he was on the outside.

Alexei evens asks Natasha if Captain America ever talks about him.

But “Black Widow” might shine the most because of the girl power shown throughout the movie.

Yes, the widows find themselves under the oppressive regime of a horrible dictator.

But with a little reawakening, the women in “Black Widow” show they can stand up to any man.

As a result, some bada$$ women turn their dark reality into some positivity and hope for the world when they unite to overthrow a ruthless man.

But most importantly, “Black Widow” gives some background information into one of the most popular Avengers and the film is done well enough to even appeal to non-Marvel fans as a standalone film.