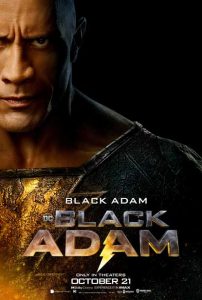 Take the voluminous amount of negative “Black Adam” movie reviews with a grain of salt.

Some critics have panned “Black Adam.”

But actually, “Black Adam” will come across as adequate for novices of the “Black Adam” comic book and excellent to many of its avid readers.

The movie “Black Adam” takes place in the fictional country of Kahndaq, the first self-governing country on the planet.

However, great governments sometimes give way to brutal tyrants as Kahndaq is taken over by an evil dictator who is intent on enslaving his people and robbing the land of its precious resources.

The leader of Kahndaq forces his enslaved population to spend every waking hour of their lives digging for a precious mineral known as eternium.

If the king can get his hands of eternium, it will make him invincible because eternium contains demonic forces, giving him enough strength to remain in power forever.

In “Black Adam,” the malevolent dictator has motivated his slaves to work hard in search of eternium by promising them an award if they find the elusive mineral.

However, when a man finds the eternium, the only reward he receives is an early grave.

In “Black Adam,” a young lad is enraged at what has transpired before his eyes after the king promised a reward for the person extracting eternium for him.

However, his father urges him not to be a hero and just keep his head down and work to avoid the penalty that is sure to come for insubordination.

But right is right and wrong is wrong and the young lad cannot sit by idly while their ruler ruins a once-thriving and free country.

The king wants to use the evil eternium mineral for his crown, which would ensure his evil empire for the foreseeable future and probably forever.

The young lad must make sure the ruler never gets to place that evil crown on his head no matter the circumstances or potential consequences.

Fast-forward thousands of years, and not much has changed in Kahndaq.

The freedom that ended for the people still has not returned to the country.

But the people still fight every day to remove oppressive forces from their land.

The residents of the once-thriving country virtually have no rights at all.

They must pass through check points just to get from point A to point B in their own country.

Furthermore, rumor has it that the old king’s crown made of eternium is somewhere within the country’s borders still.

That reality makes Kahndaq an attractive target for terrorists and those eager to make a killing on the black market.

In, “Black Adam,” Adrian Tomaz (Sarah Shahi), Ishamel (Marwan Kenzari) and Adrian’s brother Karim (Mohammed Amer) have some intelligence that might lead them to the crown.

However, getting to the location and around the checkpoints set up by outside forces will make it a very difficult task to retrieve the elusive crown.

Therefore, the crew enlists the help of Adrian’s son Amon Tomaz (Bodhi Sabongul) to run interference on the officers that control the streets of Kahndaq.

If the foursome can get to that crown, they could stop it from getting in the hands of the wrong group of people.

Or they could use it, to reverse the course that the country has traveled on since going from a thriving and free democracy to a land where freedom is nonexistent.

In “Black Adam,” the country still idolizes the young person who stood up to the brutal dictator who enslaved their ancestors and misused the crown to further his own evil desires.

The young lad is still seen as a hero in modern-day Kahndaq.

But what if the crown can bring back a hero that could stand up to the repressive forces that still hold the citizens down to this day?

A true hero could turn the course of history and restore the country to its most glorious days.

Unfortunately, a superhero will always have to face off with an anti-hero.

Therefore, even if Kahndaq had a superhero like Black Adam (Dwayne Johnson), it would not guarantee success because he might have to come up against opponents like Hawkman (Aldis Hodge, “Straight Outta Compton”), Dr. Fate (Piers Brosnan), Atom Smasher (Noah Centineo) and Cyclone (Quintessa Swindell), better known as the Justice Society.

First and foremost, “Black Adam” does not deserve as much criticism as it has gotten from many film critics.

It is definitely not as bad as many make it out to be.

“Black Adam” is just a superhero movie that audiences will enjoy more if they are knowledgeable about the story and the characters.

Superhero movies like Marvel’s “Black Panther” appealed to comic book geeks as well as those who never picked up a comic book in their lives.

Movies like “Black Panther” and “Shang-Chi and the Legend of Ten Rings” had a social significance to minority communities that made those movies special to those who never saw what was so special about superhero movies in the first place.

Unfortunately, “Black Adam” does not have that social significance.

However, “Black Adam” does have Johnson, a bona fide superhero when it comes to box office success.

Furthermore, “Black Adam” has young Tomaz who steals the show from his elders in “Black Adam.”

Unfortunately, “Black Adam” does have some cheesy dialogue in the beginning of the movie.

However, that cheesiness gives way to a lot of humor and better-written dialogue towards the end of the film, making the movie better than many pundits think.