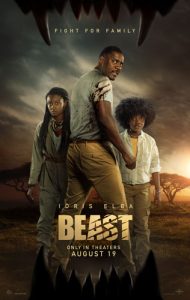 Every so often, a movie contains a little something for various types of movie fans.

However, “Beast” combines the best of both worlds in a captivating film that fuses very scary and realistic-looking computer-generated imagery (CGI) with a heartwarming story of how far a father will go to protect his daughters from danger.

In “Beast,” Dr. Nate Samuels (Idris Elba) has a great life, despite a recent family tragedy.

Nate has a lucrative job as a medical doctor.

In “Beast,” Nate has taken his daughters to South Africa to visit their mother’s old village and old stomping grounds.

Although their mother cannot join them, Nate is amazed at how much his daughters remind him of their mother, especially Meredith, his oldest daughter.

Nate’s eldest daughter has even inherited her mother’s love of photography.

Although Nate is having some trouble with his eldest daughter, which is typical for parents of teenagers, he wants them to walk in the shoes of their beloved mother and find out more of where she came from.

In “Beast,” Nate plans to take his daughters on a fun-filled trip to an African Safari with the help of longtime family friend, Martin Battles (Sharlto Copley).

Uncle Martin, as the girls call him, has known their mother since childhood and even introduced their mother and father to each other back in the day.

Martin has a love and knowledge of the wild animals that very few have.

He even has a rapport with some of the lion prides (groups), raising some since they were cubs, before setting them free in the wild.

The poachers have decimated many of the lion prides and other sets of animals, killing countless animals to sell their body parts and bones on the black market.

In “Beast,” the poachers have become predators, and the animals the prey.

However, what happens when those same animals realize the threat that human poachers pose to their survival, and go rogue?

Sure, wild animals are always a threat to human beings.

But what happens when a lion becomes an apex predator, taking out its rage on anyone that looks like a poacher, which in essence is anything that looks human?

If that happens, then anyone in its vicinity will become its prey, and what should be a “harmless” lion becomes a beast terrorizing everyone in the nearby South African villages, as well as other animals that get in its way.

In “Beast,” Nate finds himself in a predicament that no parent would ever desire.

Nate, his daughters and their close family friend Martin are stuck in the middle of nowhere with no means of communication with the outside world, no weaponry and no way to truly protect themselves from a lion that has gone rogue and transformed into an apex predator.

What started off as a bonding trip to reconnect with his daughters, becomes a terrifying, but mesmerizing, attempt at survival against seemingly insurmountable odds and an almost certain death.

Although “Beast” could have easily gone into corny territory as some movies using CGI do, Will Packer is too dope as a producer to allow that.

Furthermore, Elba is too dope of an actor to even sign up for something that can be called corny or lame.

The predatorial lion looks completely like the real deal in “Beast,” with the blood of his latest victim drenched around its vicious mouth throughout the film.

But despite the seemingly insurmountable odds, the will to survive, especially when one’s children are in danger, might give one the strength, courage and fearlessness needed to do battle with a deadly and vicious lion, hellbent on human carnage.

The action scenes are fantastic in “Beast.”

The lion will literally have moviegoers on the edge of their seat.

But it is the human dynamic that will truly resonate in “Beast.”

The love one has for family and friends that are like family will make one willing to put their well-being in danger to protect the ones a person loves.

Unfortunately, “Beast” has some predictable moments.

Furthermore, “Beast” has some of the head-scratching moments that fans of horror films have begrudgingly become accustomed to.

In “Beast,” Nate and the girls would have been safer in some scenarios with common sense decisions.

But in their defense, common sense requires remaining calm and thinking logically, which is probably difficult to do when a lion wants to rip them to shreds.

In some ways, the runt of the litter makes some of the wisest decisions while her older counterparts panic when the lion attacks.

Special shout out to director Baltasar Kormakur and writers Ryan Engle and Jamie Primak Sullivan for showcasing Africa’s beauty and unique culture without venturing into stereotypes and caricature.

Kudos for showcasing single Black fathers, a demographic that does not get enough representation and love in Hollywood.

But most importantly, shout out for the depiction of young Black girls in an intelligent and brilliant manner, not in a stereotypical way.

So, in that regard, “Beast” should please even more movie audience groups, those who love action, those who love uplifting family stories and those who want cinema to broaden their horizons when it comes to the depiction of underrepresented minority groups.