Movie Review: ‘Ambulance’ Proves Why One Should Not Judge Book By Cover 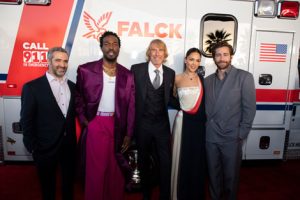 You have seen bank robbery and heist movies like “Set It Off,” “Takers” and “The Town” done to death.

Therefore, there is nothing possible to add to the genre because it has become so formulaic as it is.

Well, we all know what assuming does.

Furthermore, we all have heard the cliché do not judge a book by its cover.

Rapper Rakim once boldly stated it ain’t where you from, it’s where you’re at.

In “Ambulance,” Will Sharp (Yahya Abdul-Mateen II, “The Matrix Resurrections”) must have taken that lyric to heart because although he comes from a family of infamous bank robbers and criminals, he has tried to live his life as upright as possible.

Will served his country bravely in “Ambulance.”

However, that has not necessarily resulted in a heroic welcome on the home front.

Like Tisean (Kimberly Elise) in “Set It Off,” Will desperately needs more money to care for the needs of a loved-one.

However, he does not want to resort to violence to accomplish his financial goals.

Although Will’s brother Danny Sharp (Jake Gyllenhaal, “Everest”) admires his brother’s upright ways and his heroism on the battlefield, he has no desire to follow in his bro’s footsteps.

Danny knows he is a criminal.

Will knows that Danny is a criminal.

That is why she wants Will to stay clear from his brother and focus on getting legitimate work.

Will and Amy have not even invited Danny to the house to meet his young nephew yet.

But despite the estrangement, when Will needs thousands and thousands of dollars that his insurance company will not provide for experimental surgery for Amy he somehow shows up at Danny’s place of business.

And while Amy thinks Will is on an interview for a forklift job, because as she says Will can drive anything, he finds himself sucked into one of Danny’s felonious capers.

In “Ambulance,” Cam Thompson (Eiza Gonzalez) is an expert EMT, who has seen everything under the sun on her job.

When she and rookie partner Scott (Colin Woodell) rescue a young girl named Lindsey (Briella Guiza) from a gruesome car accident, Cam takes it in stride and goes on about her day like nothing ever happened.

On the contrary, Scott talks about throwing up after seeing what just happened to that injured little girl.

In “Ambulance,” Officer Scott is new to the job of being a police officer and obviously new to approaching women.

Scott sees a bank teller that he has the hots for all the time.

However, he still has not found the courage to approach her and ask her for a date.

But when his more experienced partner Officer Mark (Cedric Sanders) forces him to face his fears and ask the young lady out, his life changes forever, for better or worse.

By some strange twist of fate, all the aforementioned players and many others, converge on the same bank at about the same time.

As a result of this meet up, lives and the city of Los Angeles will be changed forever, for worse with better nowhere in sight.

“Ambulance” provides all the thrills for adrenaline movie junkies.

The movie has high-speed chases, shoot-outs, crashes and enough blood to fill a blood bank.

However, the blood and gore are something that might scare some moviegoers off because some scenes get so graphic that those with weak stomachs might have to turn their heads.

But despite the violence, like “Set It Off,” the movie “Ambulance” has characters that moviegoers will feel empathy for and will like, despite some of their criminal ways.

Simply, the book about their lives is often more nuanced than the cover suggests.

Some criminals are born into environments in which all they know is a life of crime.

Even when someone from that background tries to live an honest life, the hardships and obstacles of life can make one tempted to solve those problems in a dishonest fashion.

In “Ambulance,” moviegoers and everyday people will be able to relate to Will even if they have never faced the dire straits that he is facing.

Even the most moral and upright person would have to think about resulting to illegal means to provide for their family if put into his situation.

What do you do when the insurance companies let you down?

What do you do when you have served your country valiantly in war but still face a constant battle finding employment to provide for your young family?

Furthermore, viewers of “Ambulance” will also take a liking to the career criminals of the movie like Danny.

Will’s brother proves that there are levels to criminality and all criminals are not created equal.

Some criminals only want the money and want no parts of bloodshed even when violence might be their only way out of their current predicament.

Danny’s style does not scream criminal either from a visual standpoint.

His smooth wardrobe, which includes cashmere, will remind heist movie fans of the style and grace of the bank robbers in the movie “Takers.”

Nevertheless, criminals are still criminals even if they have style and heart.

And despite the gore and blood, “Ambulance” answers the call because of its heart and style (i.e. drone visuals).