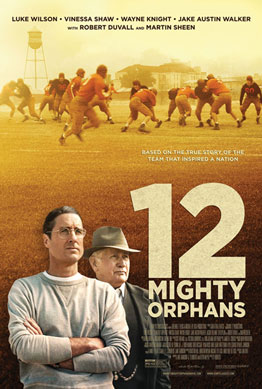 Hollywood sports movies can become a little too cliché.

The movie “12 Mighty Orphans” follows the same template as the aforementioned sports movies, with a little different storyline.

But despite the familiarity displayed in “12 Mighty Orphans,” the film still dazzles with characters that moviegoers will take a liking to, therefore rooting for them to climb the mountains of tribulations into an eventual triumph.

Many people love an underdog story.

Some people loathe the person that became successful in life because they were born with a silver spoon in their mouth.

People seem to really dislike the person that is born on third base, but that person acts as if they hit a triple to the opposite field.

When those type of people make it home, very few applaud because how hard is it to make it to Homeplate when a person is gifted three bases from birth?

However, when a person succeeds against the odds people love that type of story because it inspires them to overcome their trials and tribulations in life.

When a person gets it “out of the mud,” people applaud because before people’s very eyes, they become that proverbial rose that grew from concrete to paraphrase the late rapper/actor, Tupac Shakur.

But “12 Mighty Orphans” does not just represent one rose that grew from concrete.

The football film depicts 12 roses that grew from concrete and bloomed into full flowers despite the odds stacked up against them.

The NFL is filled with players who grew up rough.

Some grew up with single parents.

And even some of those that had a strong parent had to deal with tough luck and bad breaks like homelessness.

But how would the average person feel if both of their parents abandoned them, and they had to grow up in an orphanage?

Furthermore, how would the average person feel if the orphanage did not try to heal their wounds and build them into respectable adults?

How would the average person feel if the orphanage or school they attended used them as child slave labor just so that the institution could turn a profit before kicking them out once they hit adulthood?

Then, imagine all this happening during the Great Depression, an era in which many people struggled just to find food to eat and a decent place to lay their head.

Unfortunately, the 12 mighty orphans who became a powerhouse Texas high school football team in 1938 did not have to imagine those horrors because they lived it every day.

But more importantly, those 12 mighty orphans did more than just live it, they overcame it and went down in Texas history for their exploits on the gridiron.

At Temple, Rusty had become a revered football coach, known throughout the Lone Star State.

For some inexplicable reason, however, he decides to move his wife and daughter to Fort Worth, Texas to take a job teaching and coaching football at the Masonic Home for Orphans.

Not only are the resources less at the Masonic Home than they were in Temple, but the talent pool has also less to play with too.

In fact, if the male students at Masonic Home have any athletic talent, they have not tapped into it yet, because none have even played football before.

Unfortunately, very few have tapped into their academic talent either, because when the UIL makes the potential players pass an aptitude test in order to suit up for football, only 12 players pass.

Furthermore, getting into Class A Texas high school football means that a school must have 500 students enrolled.

Masonic Home has only 150 students.

But that does not mean the team finds immediate success.

Therefore, Rusty must become innovative in order to put his players in position to beat the bigger and stronger teams.

Rusty champions the Wing-T offense and creates the spread offense that revolutionized the game of football, taking it from a run first sport to a pass first sport.

What makes “12 Mighty Orphans” stand out are two characters, Hardy and Rusty.

Unlike his classmates, he has the acumen to succeed in school and the athletic ability to shine on the football field.

But his bitterness at the cards life has dealt him makes him almost impossible to reach.

Hardy does not think his elders can relate to his pain.

But Rusty can definitely relate to Hardy’s plight, and the plight of all of his peers at Masonic Home.

The fact that Rusty can relate to the students at Masonic Home is why he took the difficult job of teaching and coaching the Orphans, rather than stay comfortable in Temple.

But despite the strong characters, “12 Mighty Orphans” does not add much to the sports film genre.

The one difference between “12 Mighty Orphans” and “Remember the Titans” and “Glory Road” is the orphanage angle.