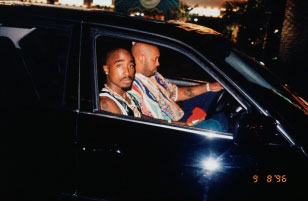 Death Row Records CEO Suge Knight drives Tupac Shakur on the Las Vegas Strip moments before he was shot in a drive-by shooting on Sept. 7, 1996 (Photo courtesy of Leonard Jefferson).

Rapper/actor/activist Tupac Shakur tragically lost his life on Sept. 13, 1996 in Las Vegas after getting shot in a drive-by shooting on the Las Vegas Strip on Sept. 7, 1996.

Twenty-five years later, the National Museum of Organized Crime and Law Enforcement, also known as the Mob Museum, will host a special program on Sept. 1, which will include discussions from rap legend/activist Chuck D of Public Enemy and others as they explore what led up to Shakur’s death at 25 years old.

Per the press release, “As many Las Vegas locals and fans across the world would learn, on the night of September 7, 1996 in Las Vegas, hip-hop superstar Tupac Shakur was shot four times while sitting in a car idling at a stoplight.

“Shakur died six days later at a local hospital. His death was devastating to his family, friends and millions of fans. It also further inflamed tensions between rival record companies on the west and east coasts, as well as between street gangs associated with them.

“To mark the 25th anniversary of this horrific event, hip-hop artist Chuck D and three other panelists will explore what happened on the night of the shooting as well as the cultural impact the murder of Shakur inflicted.”

Chuck D met a young Shakur on tour in the early 1990s when Shakur worked as a roadie for the Oakland-based hip-hop group, Digital Underground.

Other participants in the special program include rapper E.D.I. Mean from Shakur’s protégé rap group, The Outlawz, journalist/film producer Stephanie Frederic who worked on the Shakur biopic “All Eyez On Me” and the A&E docuseries “Who Killed Tupac?” and Greg McCurdy, a public information officer for the Las Vegas Police Department at the time of Shakur’s murder.

Tickets for the special Shakur program at the Mob Museum in Las Vegas cost $75.

Purchasing a ticket gives attendees the opportunity to participate in a meet and greet with the panelists at the Mob Museum from 5:30 p.m. to 6:30 p.m. on Sept. 1.

Museum Members will receive a 10 percent discount on tickets.

Although Shakur began his rap career with more politically conscious and socially relevant songs like “Brenda’s Got a Baby” and “Trapped” from his 1992 debut album “2Pacalypsye Now,” his lyrics began to become more gangster when he realized that “gangsta rap” sold more than conscious rap.

Despite moderate sales on his first album, by 1994 Shakur had become a household name thanks to standout roles in movies like “Juice,” “Above the Rim” and “Poetic Justice,” in which he starred opposite of Janet Jackson.

By that time, his records sales had also increased thanks to classics like “I Get Around” and “Keep Your Head Up” from his sophomore album, “Strictly For My Ni@@az,” released in 1993.

However, as his star continued to shine brighter, his attraction to controversy began to grow as well.

By 1995, Shakur found himself in prison for a rape charge that he denied until his dying day.

And despite having the number one pop album in the country with his third album “Me Against the World,” the Hollywood sensation could not afford the $1.4 million bail needed to free himself while appealing his rape conviction.

Knight submitted the money to bail Shakur out of jail on the condition that he record three albums for Death Row.

Those three records included the double album “All Eyez on Me” and the “Makaveli” album.

However, teaming up with the volatile Death Row Records, home to Dr. Dre and a young Snoop Doggy Dogg, seemed to add fuel to Shakur’s fire.

Although some of Death Row’s artists like Snoop Dogg and Daz Dillinger identified with the Crips street gang, Knight affiliated himself with the Mob Piru set of the Bloods street gang.

As a result, Shakur began to associate himself with the Mob Pirus.

At the time, Shakur also had his own beef with Bad Boy and their marquee artist The Notorious B.I.G. (Biggie Smalls) and the head of the label, Combs.

Shakur and Biggie became fast friends early in Biggie’s career, with Shakur even letting Biggie and Diddy perform during his concerts so that they could get exposure.

However, when Shakur got shot five times after entering Quad Studios in New York in November 1994, he blamed Biggie and Combs for not warning him about the ambush.

Shakur went on to insinuate that Biggie and Combs, who were working in the studio that night too, had set him up.

The beef led Shakur to release the classic diss track, “Hit Em Up” in 1996.

Combs had a connection to the South Side Crips from Compton, Calif, who would provide security to Bad Boy artists when they visited California.

When Lane saw Anderson at a Las Vegas hotel after the Mike Tyson/Bruce Seldon boxing match on Sept. 7, 1996, he whispered something to Shakur who took off and punched Anderson.

Later, Knight and members of the Mob Piru street gang jumped in, kicking Anderson as he lay on the hotel floor.

Hours later, while riding with Knight on the way to a party at Club 662 in Las Vegas, Shakur was shot as a he sat in the passenger seat, dying six days later.

Davis was in the car with Anderson that night.