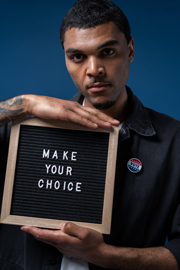 Local voting has a more direct impact on issues like police brutality than national elections.

Voting has always provided a means of protest for all communities.

But often, the media and the masses focus on the national elections because the glamour and prestige of those titles like president and senator.

However the real work, as it pertains to police brutality and prison reform, begins at the local level.

Therefore, activists like radio personality Mike Muse have taken the movement and put words into action with his new organization, Vote Quadrant.

Furthermore, the co-host of “Sway in the Morning” on Shade45 (SiriusXM) said that African-Americans should not be hesitant to focus on one issue because many people vote on singular issues like gun rights and abortion.

The Vote Quadrant is a four-pronged approach to address the issue of police brutality.

All of those four positions are held at the local level.

District attorneys determine who gets prosecuted.

Furthermore, the City Council approves the budget for police departments.

So while many people gravitate to the glamour of national elections, thanks to the amount of press coverage national elections receive, Muse wants to get the African-American community more hyped about voting for the people that really make a difference in their communities.

According to VoteQuadrant.com, “Vote Quadrant is a solution created to affect change within the criminal justice system, at the local level, by voting solely on the issue of ending police brutality. A recommendation for strategic voting. Vote Quadrant is a system that teaches us how to vote strategically to end police brutality. It’s not enough to say vote, but it’s important to know how to vote.

“The Quadrant, focuses on four municipal offices: mayor, district attorney, police chief and judges. (Since the police chief is typically appointed rather than elected, your focus extends to whoever appoints them—generally the mayor or city/county manager).

“That is where criminal justice reform begins; that is where we must exercise our power. Granted, it’s all too easy to say ‘vote strategically’ without providing the tools and resources to make it a reality. So it’s time to do just that.”

During the panel discussion, the importance of participating in the 2020 census came into the discussion.

The government uses the census to determine how much money various communities receive throughout the country.

Furthermore, congressional districts are drawn based on that data.

Muse mentioned that African-Americans should pay attention to how gentrification affects everything from congressional races to jury duty and jury selection.

Furthermore, will the concerns of the African-American community be heard if the makeup of the area changes drastically?

These issues began serving as Muse’s muse after the killing of Ahmaud Arbery in Georgia.

On VoteQuadrant.com, Muse said, “Watching the cellphone video of Ahmaud Arbery being hunted and gunned down hit me differently. It wasn’t more or less tragic than the many, many other Black men whose murders we have witnessed over the past decade—the ones choked to death on a sidewalk, gunned down while playing with a toy gun in the park, cut down in the passenger seat while complying with an officer’s directive.

“But it was very different in another way: The two White men who killed the 25-year-old Arbery, George and Travis McMichael, were not officers of the law. The father and son were merely residents of Georgia, who took it upon themselves to leave their homes and hunt Arbery down as he jogged through the neighborhood. The Jim Crow-era tactics of the past have become contemporary trauma.”

Muse continued, “Yet, the most chilling part wasn’t the act itself, but finding out that the prosecuting attorney advised the Glynn County Police Department that there was ‘insufficient probable cause’ to issue arrest warrants for the McMichaels. Be clear: That decision deemed a Black man’s life’s disposable. It demonstrated that there is no consequence in taking a Black man’s life—that White men can take that life by simply playing into the narrative that Black men pose an implicit threat and citing ‘stand your ground’ laws as shelter.”

To change that, Muse suggests the Vote Quadrant to vote people into local offices that will hold all people accountable for their crimes, Black, White or blue.

In TheHill.com, Becky Kip wrote, “Voting for the president is often the first thing that comes to mind when most of us think of taking political action. While it’s true that voting for the highest office is important, the changes that most affect our day-to-day lives are often closer to our backyards than to Washington. I’m talking about local elections.

“While the presidential campaigns get most of the media spotlight, the president doesn’t have as much of a direct impact on the lives of citizens as you might think.  Our local elected officials are the ones who dictate the local laws, policies and budgets that affect us the most, and these officials are being elected every year with little citizen involvement.”