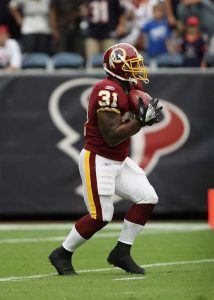 The Washington Football Team rechristened themselves as the Washington Commanders in 2022 after decades of playing under a nickname that many considered a racial slur against Native Americans.

With news breaking that Daniel Snyder had connected with Bank of America to explore a sale of the National Football League (NFL) team the Washington Commanders, media mogul Byron Allen announced that he has started working with an investor group to purchase the franchise.

In February, Allen prepared to place a bid to purchase the Denver Broncos, which ultimately went to the Walton family of Wal-Mart fame.

The Snyder family, in a statement, said, “The Snyders remain committed to the team, all of its employees and its countless fans to putting the best product on the field and continuing the work to set the gold standard for workplaces in the NFL.”

However, much of the gold has rusted recently when it comes to the Commanders’ reputation as an organization and its workplace environment.

Snyder paid $1.6 million to a Commanders employee that said he sexually assaulted her.

Documents from 2009 claim that the Washington Commanders’ owner asked a woman for sex, groped her and attempted to remove her clothes.

Although Snyder denied the allegations, claiming it as an extortion attempt, he and the Commanders organization agreed to the settlement.

Furthermore, the accuser agreed not to sue Snyder and the Commanders or disclose her allegations publicly.

ESPN reported the news of the criminal investigation this week.

The report stems from two sources familiar with the criminal investigation.

Don Van Natta Jr. of ESPN reported, “The sources said that prosecutors are focused on several areas and that the inquiry was triggered by a letter the House Committee on Oversight and Reform sent to the Federal Trade Commission and several attorneys general in April that alleged deceptive businesses practices. Attorneys general in Virginia and Washington, D.C., also are investigating allegations of financial impropriety.”

Although the Commanders did not immediately respond to the ESPN report, the team did release a statement from team attorney John Brownlee of the Holland & Knight law firm.

The statement reads, “It is not surprising that ESPN is publishing more falsehoods based solely on anonymous sources—given today’s announcement…We are confident that, after these agencies have had a chance to review the documents and complete their work, they will come to the same conclusion as the team’s internal review—that these allegations are simply untrue.”

NFL spokesperson Brian McCarthy refused to comment when asked whether the league was aware of the criminal allegations against the Washington Commanders.

McCarthy added, “The NFL in April engaged former SEC chair Mary Jo White to look into this matter. The review is ongoing.”

ESPN reported, “White is leading the NFL’s second investigation into matters involving alleged sexual misconduct in Snyder’s organization, including the owner’s own alleged sexual assault of a woman on his plane in April 2009. It’s not clear when White will wrap up. The first investigation, led by Beth Wilkerson, resulted in a $10 million fine and a suspension for Snyder but produced no written report.”

In a letter to the FTC, the House committee alleged it found evidence of deceptive business practices spanning over a decade, which included withholding refundable deposits from fans and ticket revenue from visiting teams.

ESPN reported, “At one point in 2016, the team retained up to $5 million from 2,000 season-ticket holders while also concealing sharable revenue from the league, according to the committee.”

In the letter, the committee showed evidence of unreturned deposits.

Citing emails and testimony from Jason Friedman, longtime vice president of sales and customer service for the Commanders, the committee said tickets sells from Washington football games were shifted to a Kenny Chesney concert and a 2014 Navy and Notre Dame football game to keep it off the books so that the money would not have to be shared with the NFL.

Recently, the Commanders quieted decades of controversy regarding the team’s former nickname, which many believed was a racial slur against Native Americans.

The team wanted to acknowledge the military with its new name but kept the team’s burgundy and gold color scheme.

In Major League Baseball, the team in Cleveland changed their name from the Indians to the Guardians in a similar move to get away from racial or ethnic nicknames.

The Cleveland Guardians, who also kept their same color scheme of red and blue, chose their new nickname because of the art deco statues on the Hope Memorial Bridge near its ballpark Progressive Field.

The statues are known as “guardians of traffic.”

If Allen becomes the first majority Black majority NFL team owner, it will not be the media mogul’s first foray into the sports business.

HBCU GO has also partnered with local television networks to air the games on traditional television.

Furthermore, HBCU GO has partnered with the HBCU Basketball Association (HBCU BA) to give HBCU alum another league to play professionally once their collegiate days are done.

Robert Covington of Tennessee State is the last HBCU alum to get drafted in the National Basketball Association (NBA), although many HBCU alum have found success playing in the NBA G League and in overseas leagues.