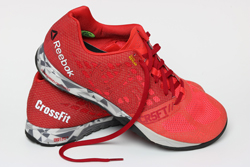 Hip-hop mogul Master P wants to transform Reebok from a basketball brand to a lifestyle brand.

The founder of No Limit Records, rapper, actor, professional athlete and sports agent now wants to add another title to his list of never-ending accomplishments.

Forbes reported that the mogul born Percy Miller has teamed up with former NBA All-Star Baron Davis to lead an investment group that is in talks to purchase Reebok from Adidas for $2.4 billion.

“I think Reebok is being undervalued,” Davis said. “I left Nike as a 22-year-old kid representing myself and made the jump to Reebok, which took a chance on me as a creative and as an athlete. I want the people I know athletes, influencers, designers, celebs to sit at the table with me.”

The sports apparel and shoe company Reebok has a history of partnering with hip-hop icons like it did with Jay-Z and his S. Carter sneaker line.

Master P said, “As we focus on turning Reebok into a lifestyle brand not just a basketball brand, our most important initiative will be to put money back into the community that built this company.”

“These companies have been benefitting off us, this could be history for this company going Black-owned,” said Master P.

Complex reported, “Adidas reportedly had plans in motion to sell Reebok in October before it officially announced its plans to asses strategic alternatives for the sportswear brand earlier this month as part of the development of its latest five-year strategy. These moves include both a potential sale of Reebok as well as the brand remaining a part of the company, but Adidas confirmed that a decision will be announced on March 10, 2021, when the company’s new strategy is officially unveiled.”

The company had plans to corner the United States market by using Reebok’s former apparel and licensing deals with the National Basketball Association (NBA) and the National Football League (NFL).

When Adidas CEO Kasper Rorsted took over the company in 2016, he faced mounting pressure from investors to sell Reebok, despite vowing that he had no intention to sell the brand.

In the second quarter 0f 2020, Reebok’s revenue decreased 42 percent, mainly because of the negative effects of the coronavirus pandemic.

Master P has experience in the shoe game already.

Additionally, the New Orleans native recently started another shoe line called Moneyatti, which he calls the “Bugatti” of sneakers.

In the late 1990s, Master P also had a P. Miller clothing brand, which he often cross-promoted in the jackets of No Limit Records compact discs and cassette tapes.

Davis has made a mark in the clothing business as well.

In 2017, Davis hooked up with The Black Santa Company to launch the Dream Collection, a clothing line inspired by Martin Luther King, Jr.’s historic 1963 “I Have a Dream” speech.

The mission of the Dream Collection was to encourage diversity and inclusivity, while also giving back to the community and bringing people together.

In 2017, TheUndefeated.com reported, “The Dream Collection is an assortment of men’s and women’s crew neck sweatshirts, hoodies and T-shirts. Each piece features the Black Santa or the newly launched ‘Mrs. C’ character and is highlighted with the words ‘King,’ ‘Queen’ or ‘Dream’ promoting self-confidence.”

Davis said, “We create our futures with inspiration from the past, and we live in a world that needs a constant reminder of hope and positivity. I want to continue to give people the ability to dream and imagine something different. I want to make people feel good about themselves.”

The former NBA All-Star had a stellar professional basketball career.

BasketballReference.com reported that Davis had career averages of 16.1 points per game and 7.2 assists per game.

The former UCLA Bruin played for the Charlotte/New Orleans Hornets, Golden State Warriors, Los Angeles Clippers, Cleveland Cavaliers and New York Knicks in a career that lasted from 1999 to 2012.

Master P also played briefly for the Charlotte Hornets and the Toronto Raptors in the preseason.

At the time of his tryouts with the Hornets and Raptors, Master P had already turned No Limit Records into one of the biggest independent record labels in the business.

No Limit Records releases were known for their cover art by Houston-based company Pen and Pixel and the gold No Limit tank medallion on the back of compact disc covers.

After making a name for himself in music, Master P took his No Limit brand to the big and small screens with movies like “I Got the Hook Up,” “Foolish” and the straight to video movie, “I’m Bout It.”

Master P also got into the food industry with his Rap Snacks chips and noodles, which are branded with famous rappers like Boosie.

Davis has a reported net worth of $60 million.

On the other hand, Master P has a net worth of $200 million.

“We want this to be a community effort that sets up the next generation of leaders for success,” said Vy Le, CEO of Baron Davis Enterprises.

If the bid to buy Reebok proves successful, Master P and Davis will truly prove that “ain’t no limit.”