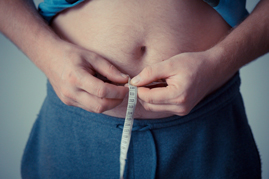 Over the past several years, mainstream media seems to be doing a better job of praising all female body types.

Celebrities like pop singer Lizzo and model Ashley Graham have proven that a woman does not have to wear a size zero to reach superstardom in Hollywood.

But now, some want to highlight male body positivity and as a result the fashion show Ryan’s Secret brought a new look to New York Fashion Week, with plus size men proudly walking the runway.

“Especially being a big guy myself, going for job interviews, if you’re not looking like some studly guy, sometimes you don’t get the job,” said Joseph Diaz, 36, one of the models at the Ryan’s Secret fashion show on Feb. 13. “Just like Barbie has the same issues, Ken has even more.”

Myriam Chalek, Ryan’s Secret creative director and designer, created the movement to shed light on young males who experience depression and contemplate suicide because of bullying and body shaming.

Chalek even mentioned steroid abuse by men who work out relentlessly to look a certain way.

Many blame this phenomenon on superhero movies and the idea that men have to have a certain chiseled look to reach a certain level of masculinity.

“These bodies are attainable for a small number of people—maybe half a percent of the male community,” said registered dietician and nutritionist Aaron Flores of Calabasas, Calif. “Yet they’re associated with the idea of masculinity—the notion that as a man, I have to look a certain way, act a certain way.”

Model Daniel Jean said, “Yeah, I’m body positive, I think it’s a good message to show people that you love your body, you love yourself. You know it’s hard out there the way the media portrays you, you know, especially when you’re a big guy.”

And although body image usually gets more attention amongst females, many psychologists have begun investigating body image issues amongst males in the last few years.

Psychologists Jessica M. Alleva, Nicole Paraskeva, Nadia Craddock and Phillipa Diedrichs from the Center for Appearance Research in Bristol, U.K. conducted research on how men feel about their body image.

In Psychology Today, Alleva wrote, “In our research, 400 British men between 18 and 85 years old completed questionnaires to assess their levels of positive body image and other characteristics.

While some believe that men taking pictures working out would encourage other men to work out and eat right, many say that it negatively affects their body image and does not motivate them to get healthier.

One anonymous man said, “Social media shows us all these folks hitting the gym, losing weight, getting ripped… you’d think it’d inspire me, but most times it makes me want to hide in a corner.”

Some men have also shown concern about hair loss, skin care and height as well.

Healthline.com wrote that male cosmetic surgery increased by 325 percent since 1997.

While Lizzo has made a difference in positive body image for ladies, women in the public eye have long faced stricter standards when it comes to looks.

Furthermore, as women age in the media or entertainment business they sometimes do not enjoy the same longevity as their male counterparts.

NationalEatingDisorders.org lists 10 things people can do to help them have a positive body image.

First, people should appreciate all that their body can do for them.

Third, people should constantly remind themselves that beauty is more than skin deep.

People should surround themselves with positive people and avoid negativity in their lives.

Furthermore, people should always remember that they are a whole person and not just their outer appearance.

Moreover, people should ignore the thoughts in their head that make them question their appearance.

Ultimately, people should be wary of social media posts because people often do not air their imperfections on social media; just things that make them look good to the masses.

Additionally, doing something nice for yourself will often improve self-esteem.

Lastly, instead of focusing negative energy on your flaws, spend time doing something helpful for others.