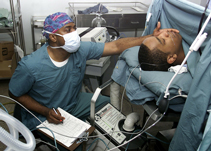 African-Americans are dying at a higher rate from COVID-19 than other races because of underlying health issues and inequality in the healthcare system.

Not too long ago, rapper Waka Flocka Flame said that minorities could not get coronavirus and some people believed that according to social media.

Apparently, COVID-19 did not get that message because the virus has attacked the African-American community especially hard.

New Orleans City Councilman Jay Banks said, “This is unprecedented. This has been one of the hardest things I’ve ever had to do because you’ve got to get to people to understand how serious and devastating this thing is.”

Banks also serves as the chairman of the New Orleans Mardi Gras krewe, Zulu Social Aid and Pleasure club, which has lost six members to COVID-19.

In the state of Michigan, African-Americans have died at eight times the rate of their White counterparts despite making up only 14 percent of Michigan’s population.

However, 72 percent of COVID-19 deaths in the “Windy City” are from the African-American community.

Chicago Mayor Lori Lightfoot said the statistics shocked her and take her breath away.

“We had initial concerns when we first saw the outbreak coming, particularly the early reports out of China, and we recognized this may be a problem for communities of color. You had early evidence from Asia that showed that older folks, older than 60 or 65, with chronic disease would do worse when they got the infection,” said Dr. Georges E. Benjamin, emergency medicine physician and executive director of the American Health Association. “So when you put that together with the understanding that in this country you already have a [Black] population disproportionately affected by disparities in things like diabetes, heart disease and asthma, we understood that if those populations got infected they would be at more risk.”

Benjamin sees similarities between the coronavirus crisis and the AIDS epidemic and the opioid epidemic.

Benjamin said, “I was around in the early days of the AIDS epidemic and watched that one ravage communities…and even how the opioid epidemic ravaged communities of color.”

Even Dr. Anthony Fauci, immunologist and director of the National Institute of Allergy and Infectious Diseases, said that the coronavirus’ impact on the African-American community reminds him of the AIDS epidemic in the 1980s.

Fauci has served as immunologist and director of the National Institute of Allergy and Infectious Diseases since 1984.

He said, “The greater proportion of my professional career has been defined by HIV/AIDS…African-Americans dying at greater rates from COVID-19 could be a similar moment.”

Leading officials in the fields of medicine, public health and law have criticized the lack of information about race and the coronavirus pandemic.

Many have called the lack of racial data concerning the coronavirus an injustice, which has contributed to a lack of understanding about this virus and its impact on minorities.

“States are reporting data along lines of geography, gender and age—there is no defensible reason for excluding racial data,” said Kristen Clarke, president and executive director of the Lawyers’ Committee for Civil Rights Under Law. “Our ability to fully understand and confront this pandemic requires and demands that we obtain racial data.”

Benjamin said that health officials told him early on that African-Americans were dying at higher rates but he had no way to find data.

“I got calls early on from some state health commissioners that they were seeing a disproportionate number of deaths in people of color. When I initially went looking for the race information early on I couldn’t find it,” Benjamin said. “At that point they were anecdotes and not evidence, but enough of them raise alarms.”

Another alarm that the coronavirus has raised is systemic racism within the healthcare industry, which also includes economic racism.

Fauci said that the current pandemic is “shining a bright light on how unacceptable that is.”

Fauci said, “It’s not that they’re getting infected more. It’s that when they get infected, they’re underlying medical conditions wind them up in the ICU and ultimately give them a higher death rate.”

Obviously, money, or lack thereof, plays a major role in why coronavirus has had a more adverse affect on the African-American community than on other communities.

Without good paying jobs, many people do not have adequate healthcare.

Furthermore, low-paying hourly jobs like grocery store cashiers and jobs in the food industry could increase the exposure to the coronavirus.

Some out-of-work Americans have said no to temporary jobs that could expose them to coronavirus.

“One of the biggest mistakes supermarkets made early on was not allowing employees to wear masks and gloves when they wanted to,” said supermarket analyst Phil Lempert. “They’re starting to become more proactive now, but it’s still going to be much tougher to hire hundreds of thousands of new workers. We’re going to start seeing people say, ‘I’ll just stay on unemployed instead of risking my life for a temporary job.’”

Furthermore, many African-Americans have distrust for the medical profession after experiencing racism while seeking medical care.