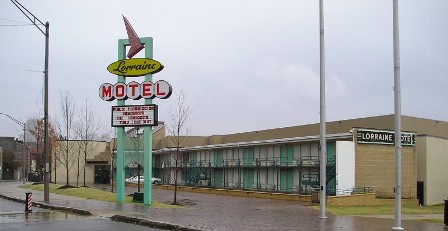 The National Civil Rights Museum in Memphis, Tenn at the Lorraine Motel is a must-see for all Black Americans (Photo courtesy of tellthetruthtravel.com).

Whether you are standing at the mournful spot along the gateway of slavery or at a hiding place on the road to freedom, there are a few places that African Americans should see and they are right here in the United States.

We researched many locations that had notable attributes, but we have selected these top 10 places to visit to just wet the whistle on what we hope will become an ongoing cultural adventure to better understand and appreciate African American contributions and accomplishments.

Clearly, we know that everyone speaks proudly about their hometown, but five cities in particular made our list because of their connection to African American history and their distinctive African American focused facilities.

First is Atlanta, the capital of Georgia, which is also home to the National Historic Site honoring the late Rev. Dr. Martin Luther King, Jr. and remembering his work.

The site is comprised of King’s family home, his family church – Ebenezer Baptist Church – and the King Center.

This southern capital is becoming an emerging trendsetter for African Americans in government, social activism, entertainment and culture.

Next, Baltimore also known as “Charm City” is becoming a cultural center and is setting its own trends with great seafood, three historically Black colleges, two new sports stadiums and a growing medical presence.

In addition to being the headquarters of the NAACP, Baltimore is the home of the Reginald Lewis Museum of Maryland African-American History & Culture, which is the largest African American culture museum on the East Coast.

Lewis was a leading businessman and philanthropist and one of the richest African Americans in history.

Continuing northward to the financial capital, we should take time to visit New York, but before heading uptown to the Apollo or historic Abyssinian Baptist Church, head to lower Manhattan to visit The African Burial Grounds, which is a memorial that was dedicated in 2007 to recognize the role of Africans and African Americans in the colonial times and in United States history.

The site contains the remains of more than 400 Africans buried during the late 17th and 18th centuries, but it is estimated that there may have been thousands more. The site’s excavation and study was called one of this country’s “most historic archeological projects.”

Our top 10 places to visit include New England and we suggest comfortable walking shoes to tour the African American National Historic Site in Boston.

One of these structures is the African Meeting House, which is the oldest African American church in the United States.

Now, the next place to see on our top 10 places to visit list is in Chicago, home to the DuSable Museum, which is one of the few independent institutions of its kind that was developed to interpret and preserve the experiences of people of African descent.

In addition to being an avid sports town, Chicago’s cultural scene includes the Harold Washington Library Center, an educational beacon named in honor of former Chicago Mayor Harold Washington, who was a staunch supporter of reading and education.

The rest of our top 10 places to visit include historical locations due to special and often tragic moments in time for African Americans.

Number six on our top 10 places to visit list is the National Civil Rights Museum in Memphis, Tenn., situated on the site of the Lorraine Motel, where King was assassinated.

Words alone cannot describe the emotions experienced here and the lessons that we should all learn about the importance of peace and freedom.

Sullivan’s Island, off the coast of South Carolina, which is home to Fort Moultrie has the sad distinction of being the point of entry into North America for almost 40 percent of the millions of Africans who were brought to the United States as slaves.

This site, number seven on our list of top 10 places to visit, was immortalized by renowned author Toni Morrison in her book Beloved as her way to acknowledge slavery and the plight of slaves.

Through her efforts and that of the Toni Morrison Society, a nonprofit group consisting of scholars and readers dedicated to examining Morrison’s work, many have become committed to the “Bench by the Road” project to acknowledge slavery and provide a visual tribute to those enslaved and educate the living.

And coming in at number eight on Regal’s top 10 places to visit list, we have another state capital with a historic church located practically at its base.

The Montgomery, Ala. stately capital building casts a large shadow over the Dexter Avenue Baptist Church, but fortunately for history it did not stop the strong willed members or its young, but progressive minister, Rev. Dr. Martin Luther King, Jr.

The capital was the end point of the famous “Selma to Montgomery March.”  The spirited souls of unsung civil rights advocates resonates with the oft heard “How Long, Not Long” speech that King gave from those steps.

At number nine on our top 10 places to visit list, we are highlighting St. Louis and the Jefferson Barracks National Cemetery, which is the fourth largest cemetery in the country, and is the burial site of over 1,000 members of the 56th U.S. Colored Infantry, which was organized in St Louis during the Civil War.

Number 10 on our top 10 places to visit list is more of a reminder of a tragic past in the hope of a productive future.

The Black Wall Street Memorial recognizes the demise of the once prosperous African American section of Tulsa, Okla. in 1921 that was destroyed in a riot by a White mob.

Many of the issues that caused the racial divide that ignited the race riots leveling the affluent community are, unfortunately, still unresolved in many parts of the country. The historic lessons to be learned can help to create more harmony.

While these top 10 places to visit may not represent the locations that you would normally include in your travel plans, they all represent a cross section of the historical places that should be.