Todd Smith’s Book Recommendations to Get Through Quarantine 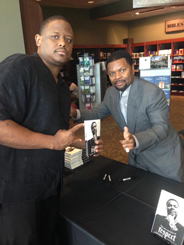 RegalMag.com publisher Todd A. Smith (left) poses with James Prince (right), the author of “The Art & Science of Respect” at Prince’s book signing at The Church Without Walls in Houston (Photo Credit: Regal Media Group, LLC).

The world is experiencing some unprecedented times.

Usually, when people have time off from school and work, they look for some means of entertainment from movies to sporting events.

But with movie theaters closing down and sporting events postponed indefinitely, reading might be a good use of so much idle time.

Therefore, RegalMag.com would like to recommend several books that will help pass the time while the world finds a way to cope with COVID-19.

These recommendations are some of the latest books read by our publisher, Todd A. Smith.

“The Art & Science of Respect” by James Prince—The man known simply as J. Prince embodies the term music mogul. Many know of his accomplishments with artists like Geto Boys, Pimp C, Bun B and Devin tha Dude. However, some might not know of his sincere faith in Jesus Christ and his belief that one should pursue their vision despite what the naysayers might think. Prince’s most profound statement in the book is that if God gives you a vision, not following that vision is really a lack of faith.

“The Beautiful Ones” by Prince Rogers Nelson (Prince)—Musical genius and Prince go together like peanut butter and jelly. But while other artists simply wanted to make art, the Minneapolis native wanted to make a difference businesswise too. This book is more of a scrapbook than the true memoir that Prince planned before his untimely passing. But it still hits on some of the topics that he wanted to tackle such as owning intellectual property.

“Hustle & Faith” by Marcus D. Wiley—Comedian Marcus D. Wiley has made a name for himself nationwide on “The Yolanda Adams Morning Show” and via his nonstop comedy tours. The Houston native is also a professor at Texas Southern University. Growing up as a P.K. (preacher’s kid) it is no secret that faith has been a major reason for his success. But Wiley believes that many Christians forget about the works part, as in faith without works is dead. In his book, Wiley teaches Christians how to apply biblical teachings with practical work ethic to achieve God’s best for their lives.

“Thomas Jefferson and the Tripoli Pirates” by Brian Kilmeade—America was not always a major player as a country as far as trade and military might. As a matter of fact, there was a time when America’s success was up in air. Pirates from the African coast constantly raided American ships while enslaving captured Americans. Those captured often had to convert to Islam or be killed. If American politicians wanted to retrieve the captured Americans, they often had to pay an excessive ransom, which could have bankrupted the fledgling nation. However, President Thomas Jefferson decided to fight back while his two presidential predecessors often chose to give in to the Tripoli pirates’ demands. Under President Jefferson’s watch, America built up its Navy, fought back, and ensured that America could fend for itself as an independent nation.

“Bobby Kennedy” by Larry Tye—The Kennedys played a vital role in the advancement of African-Americans. But that connection did not always exist. But Bobby Kennedy’s transformation from conservative politician railing against McCarthyism to the liberal lion fighting for the rights of African-Americans and Mexican Americans in a way mirrors the growth of America. Although Kennedy grew up rich, White and elite, seeing the plight of the poor truly changed him and gave America its best shot at revolution until an assassin took his life on the presidential trail in 1968.

“Diary of a Madman” by Brad “Scarface” Jordan—Almost as a companion piece to “The Art & Science of Respect,” though it came it out before J. Prince’s memoir, Scarface of the Geto Boys used his memoir to discuss the artist’s side of the music business. Scarface had much success with Prince’s Rap-a-Lot Records but did not always believe that he had the best record deals. Nevertheless, his bond with the legendary label and its legendary founder remains solid because of the magic that they created together, which created the Southern rap sound.

“The Wait” by Devon Franklin and Megan Goode—Celibacy is often frowned upon in a secular nation like America. However, Devon Franklin, a Hollywood producer and preacher, breaks down why celibacy was so important in him finding God’s ideal partner for his life. Franklin says that eliminating sex before deciding to marry often helps people see the pros and cons of a relationship that is often overshadowed by physical intimacy. Franklin co-wrote “The Wait” with his actress wife, Meagan Good.

“Billionaire at the Barricades: The Populist Revolution from Reagan to Trump” by Laura Ingraham—Regal readers do not trip. Obviously, Laura Ingraham is not popular in the African-American community because of some of her views on politics and race. But in order to change people’s point-of-view on hot-button issues, you have to understand where they are coming from. In Ingraham’s book about the surprising political rise of President Donald Trump in 2016, Ingraham breaks down why people were drawn to the polarizing president throughout Middle America. She talks about his populist views, his desire to bring factory jobs back to Middle America and his effort to include faith in his presidency. Many on the left looked at President Trump’s defeat of Secretary Hillary Clinton as an aberration. But if they really listen to regular working class Americans, they would be able to see how Trump was able to galvanize a group of citizens who believed they had been overlooked by Democrats and the Republican establishment.

“The Accidental President” by A.J. Baime—If people think Trump’s ascension to the White House was improbable, do some research on President Harry S. Truman. The future president failed at everything in life before being “placed” into politics, and later the White House. He was married with a daughter. However, all of his business endeavors failed. Truman did not own a home. But after getting into politics, Democratic kingmakers placed him on the national stage before an ailing President Franklin Delano Roosevelt named his as his vice president because he did not have any skeletons in his closet. Truman’s presidency included dropping the atomic bomb on Japan during World War II.