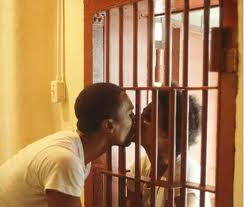 Prison dating is difficult, despite love.

Prison Dating: Would You or Won’t You?

“I just tell the kids that their daddy is working out of town,” she said. “You know, instead of telling them the truth. Because I know that the truth will really hurt them. Then, when he gets out, we just act like he is getting back from his work trip.”

A friend of mine is describing to me how she handles prison (or county jail, for him) dating. Although her boyfriend has only been to jail a few times, his time away from home and their three kids really has taken a toll on her. She has to secretly talk to him on the phone while the kids are away and covertly go to his friend to borrow money until her boyfriend can pay him back when he gets out. All the sneaking around and worrying was becoming too much for her. But, her relationship with her boyfriend seems to be worth the stress to her.

Being the daughter of a state prison chaplain, I get to hear a large amount of stories concerning chaplain duties. In addition to the religious services and counseling services, there is one activity that my father partakes in at a surprisingly large rate… Officiating weddings.

Now, I know what you’re thinking, “What?! Who would get married to a man in prison?” And, well, the answer is simple—women in love (or at least think so).

Most, if not all, of these weddings are derived from a period of prison dating or dating a man in prison. While, most women would shudder at such an idea, there are others that agree with prison dating because they have been or still are in a relationship (and perhaps even in love) with an incarcerated man.

Now, I am not sure what would make a woman interested in a man that cannot bring home a paycheck or take the kids to school. Maybe it is the litany of “prison promises” he has made to her. You know… the promises of a utopian future- like he is going to go to school, get a job, and return to church as soon as he steps his liberated feet on pavement outside of the barbed wire. Or maybe it is the understood promise that she made to him that she would remain faithful to him while he serves his federally-mandated time in prison. And by “understood” I mean that fact that his prison-time was never discussed before the 5-0 whisked him away in the creep of the night. So, it is just understood that his woman will remain in the relationship if she “really loves him.”

When I asked a friend of mine if she would be interested in prison dating, she replied, “What would he have to offer me?” Prison dating is seen as difficult and valueless. There are more downfalls to it than benefits. First, when dating an incarcerated man, the obvious downfall is that he is not physically with you. Instead, he is locked away like an animal in cage waiting for you to spend your hard-earned money to visit him and put money on his books. Secondly, he cannot do much of anything for you. This is besides the long, hand-written love letters full of promises, of course. And, when you have bills and kids to care for, those letters are nice and dandy. But, honestly, his presence and some cash are needed to sustain.

Prison dating is alive and well. It is a known fact. However, more than likely these women already have had ties with the incarcerated men before their stint in prison. Some may even have children by them… These are the “ride or die” chicks that stick by their men regardless of where he may be residing.

Maybe you would not date a man in prison… but, what about a man with a felony or a serious charge against him? A unanimous “no” was sounded when I asked my colleagues and friends this question. But, why is that?

Another friend, 27, stated that she will only date a man that is bringing the same stuff to the table as her. For instance, she is a college graduate with a great paying job and maybe a couple of speeding tickets, but no felonies. So, she expects her future mate to bring the same to the relationship.

Other women stated that felonies make it hard for a man to get a job. And, a man without a job is a definite no-no. Some women would not feel comfortable bringing home a man with serious charges as most dads would not approve of that. And, a number of women feel as if they already have trust issues with men in general, so dating a man that has done something seriously wrong in the past would be difficult even if he swears he has changed.

A smaller percentage (and usually older women) states that if the felony was long ago and he has become an upstanding citizen in the community, they would give him a chance. I could see this, but, it would have to be a “loooong” time ago.

Prison dating and dating a man with serious charges under his belt can be complicated to say the least. But, like my mom always says, “to each his own.”