Complications of Dating a Friend’s Ex 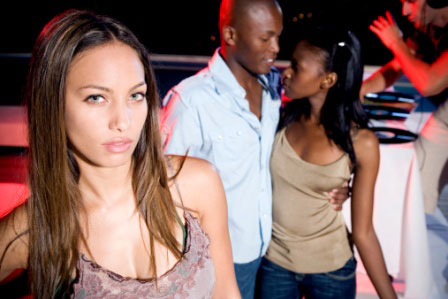 Dating a friend’s ex is a complicated situation that many discourage.

Ex-Files: Is It OK to Date a Friend’s Ex?

Well, you two didn’t make it. You dated for six months and she really was a nice girl, but she just wasn’t The One.

So, she never met your mom or came to a family gathering. Instead, she was the girl you took to the club and brought around the homies to kick it.

You two were smooth sailing until you realized that you weren’t who she needed. She wanted to settle down, get married, and start a family.  And you weren’t ready for all of that. So, the breakup was inevitable.

You went your way and she went hers. It was over. And, you were cool with that.

Until several months later when one of your best friends came to you with a serious face and in a mellow voice told you that he was seeing her. Not just any her. Her- the one you broke up with a few months ago. How do you react?

As a friend, there are “silent yet understood” rules. Whether big or small, there are invisible laws governing the relations of a friendship.

For example, a friend should always be honest, trustworthy, and easy to get along with. That’s a given.

But, there are other rules like: a friend should never let another friend go around with food on his/her face.

Or a friend always helps you move on after a break up. But what happens if that friend becomes interested in one of your exes? Is he or she acting outside of the role of friend or is he or she just acting within human nature?

Dating a friend’s ex can be an extremely perplexing situation. It’s the idea of “bros before h***.”

While the woman may not be a h**, it’s the concept of putting your friends before any female.

Oftentimes, a person feels obligated to an ex even after a break up.

So, when a “friend” becomes interested in another friend’s ex, problems may arise because of the underlying feeling that a possession (unwanted or wanted) is being pocketed.

When asked about how she felt when a friend of hers started dating her ex, one young lady explained how hurt she was:

“I couldn’t understand why she had to date him. There are other guys out there. Why would she choose someone that her best friend had been in love with?”

The young lady, 28, feels like she has been betrayed by her (now) ex-best friend. It’s like she sat back and watched her house get robbed. Like her car was being jacked. Like her feelings were being disregarded by both her friend and her ex.

But, what if you become interested in a person that your friend dated shortly or carelessly? Your friend may have treated this woman like a dirty dishrag. But when you look at her, you see a queen waiting on her king.

Do you ask if it’s OK to date her or just go for the green since your friend didn’t really seem to care about her?

A gentleman, 29, stated, “You have to ask if it’s OK to date a friend’s ex. Sometimes it’s cool to date your guy’s ex if she was only a fling for him. But, then if you and her get serious, your friend may get jealous because you made something with her that he couldn’t.”

Overall, the general public seems to think that dating a friend’s ex is not a good idea if you want the friendship to last.

It’s too difficult of a situation to feel out because you have no idea how your friend will react to the relationship regardless if he or she OK’d it or not. Certain feelings of jealously and discomfort may arise out of nowhere.

So the bottom line is: There are many fish in the sea. Try fishing for your own before you grab one out of someone else’s bucket… especially if the bucket belongs to your friend.