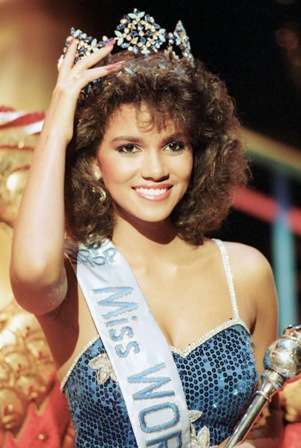 Beauty queen Halle Berry has been the it-girl for many men since she was a 20-year-old beauty pageant contestant and young actress (Photo Credit: AP Photo/Dave Caulkin).

He would walk up to her (whenever their paths crossed) and entice her with intellectual chatter about a shared love of acting. And just like that, Ellis would saunter away with one of the most fantasized-about actresses in the world.

“I’ve never been the type of person to fixate on something, [but at the time I thought] this is what I’m going to do when I see Halle Berry,” shared Ellis, now 32. “I believe I would try to holler at her. I would give it a try. I had that fantasy, but it was more a plan. [I’d say to Halle] ‘hey, just letting you know, I’m an actor also and I’m interested in your movies.’ I’d talk on an intellectual level and I would get Halle Berry.”

Actually, French actor Olivier Martinez has claimed that spot and cemented it with a wedding band on the superstar’s petite finger and their infant son in her arms. However, Ellis’ teenage crush on Berry expired when he reached adulthood.

“I don’t like Halle Berry that much anymore; she seems a little off to me,” explained the actor/comedian of sketch comedy website The Chazz Ellis Project.

“[You start to think] what would it be like if I was with this person? It goes through your mind when you get older. And if you were dating her, you don’t know what might happen.”

There is one guarantee, your admiration for her will be shared with countless others, who make their affections known plastering pictures on digital landscapes (e.g. flooding Instagram with images of their woman crush on hump day, better known as Women Crush Wednesday) for all to see.

What hasn’t been revealed is an archive of a guy’s first female celebrity crush, and if it remains the same or like Ellis, fades with age.

For Baltimore native Mike Savage, 40, it was the queen of Blaxploitation movies.

“My first crush was Pam Grier,” revealed Savage, a music promoter. “I was around 7 years old when my dad took me to see ‘Coffy’ in 1975 at a drive-in movie, and I just liked her.”

And he still seems to carry a torch for the iconic action star, even if it’s dimmed slightly.

Replacing her is R&B singer and reality star K. Michelle. The “Love & Hip Hop: Atlanta” star’s debut album “Rebellious Soul” snagged the number two spot on Billboard 200 chart last year. But for Savage, it’s more than the songbird’s voice that has him under her spell.

“Monie Love was cool. She didn’t wear sexy stuff but she (wore) provocative clothing,” recalled M.L., 37, creator of Black Men Vent radio show. “Sexuality back then was nothing like now. Girls walking down the street with ripped jeans is like something that happens every day. (Girls wearing) ripped jeans (in the 1980s and 1990s) was daring (and) bold. We didn’t see that a lot.”

Despite having a collage of female rappers on his bedroom wall as a teen, don’t mistake the wall art for a crush. M.L. said he’s only had one celebrity crush and it wasn’t when he was a teenager.

“When I think crush I think innocence. I was in love with Vanity from ‘The Last Dragon’…She was beautiful and nice…I was only 8 years old, didn’t know anything about sex, so that sounds like an innocent crush…When boys are teenagers they don’t crush, they desire to smash (have sex), which is not innocent…So boys and teenage crush don’t even go together,” wrote M.L. on Facebook.

It does for Sean Hunter, 23, who admitted to having celebrity crushes on Raven Symoné, Beyoncé and Sanaa Lathan as a teenager.

“They’re beautiful women and the roles they played were attractive to me,” explained Hunter, a Chicago native.

Not just to him.

However, it didn’t influence Hunter’s choice to narrow his fantasy girl down to one: Sanaa Lathan.

“We have the same (Zodiac) sign; she’s a Virgo, I’m a Virgo,” shared Hunter, creator of the Real Positive Black Men non-profit that mentors young men. “[I’m attracted] to her look and personality, and how she displays herself in the public.”

His affection for Lathan prompted him to publicly re-decorate his Facebook page with images of the actress and make her his Women Crush Wednesday on Instagram, an online trend Hunter finds more flattering to women than harmful.

“I think it’s a good thing because it shows appreciation for women. I would participate in it and put up Sanaa Lathan,” said Hunter with a laugh.

Dedan Tolbert, a 36-year-old relationship counselor, begs to differ on the WCWs surfing the Web wave. While it’s not something the Philadelphia resident would do, he believes there is satisfaction in it.

“I just don’t see the point in it. I tend to stay away from that kind of stuff,” said Tolbert. “But Instagram, Facebook, Twitter, they’re all for entertainment purposes anyway.”

Tolbert also admitted to never being under the spell of a celebrity crush as a teenager, but finds that some women in the limelight can’t be ignored.

“Who didn’t like Halle Berry (and) Nia Long?” asked Tolbert. “(They’re) timeless beauties. Halle Berry has always been a beautiful woman. Even today from a physical standpoint, she’s the only person that comes to mind that I would feel the need to mention,” revealed Tolbert.

Henry Cooper, 59, would add Chaka Khan to the list. He remembers being hypnotized listening to her songs like “Tell Me Something Good” in his late teens. Also, on his 18th birthday he got the ultimate wish of going backstage to see Tina Turner in concert.

“It was a concert in town and my friend got tickets. On my 18th birthday, we had a chance to go backstage with Tina Turner,” recalled Cooper of Houston.

“I was like OMG…we went in her dressing room, ate food and talked with her.  I was star-struck.”

“She’s extremely sexy. I love her voice, her persona and music.”

Zachary M.C. Harris, author of “When a Black Man Loves,” was so enamored with late singer Vesta Williams, he wrote a love letter to her in his book.

“I have always wanted to meet you and like many other men that I know, have always been attracted to you,” Harris wrote.

The Philadelphia resident told Regal it was the singer’s personality and energy that made her his crush.

Nevertheless, he still can’t explain why Angela (Judith Light) from “Who’s The Boss” was one of his teenage crushes.