Women Proposing to Men: Fellas, is it OK? 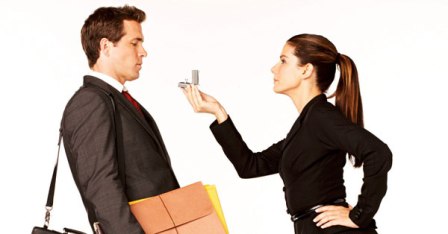 In the movie The Proposal with Ryan Reynolds and Sandra Bullock, the roles in the proposal were reversed (Photo courtesy of reallyrich.com).

Most women dream of the day that special someone drops down on one knee and utters those four words she’s been dying to hear, “Will you marry me?”

It’s something women dream about since they were little girls. Envisioning how it would happen and where.

However, in this day in age where women are constantly breaking down gender roles, is there any surprise that some women would take it upon themselves to pop the big question? Women proposing to men is something that is happening more often but is still taking people by surprise.

“I’m kind of old school when it comes to man and female relations,” said 24-year-old Ryan Roy. “I understand it’s 2013 and gender roles are much more flexible. I’m not completely against it. I just wouldn’t want my girlfriend to propose to me.”

Women proposing to men may be the thing of the 21st century. However, many men still believe in keeping gender roles and upholding their place as the man in the relationship. By giving away something that was traditionally something that the man was supposed to do, many might take it as feeling less of a man.

“If I want to marry a woman I don’t want to be emasculated and have her remove that moment from me,” said 27-year-old Cheven Boddie. “But if she did I wouldn’t be angry, just disappointed.”

It’s been an age-old tradition for a man to be the one to propose to a woman. Women proposing to men is something that seems to not be as openly accepted even amongst some women.

Some men tend to be more hesitant to pop the question because of commitment issues.

A marriage proposal is the ultimate grand gesture to show commitment and dedication in a relationship and to let their partner know when they are ready to make that big step. Women proposing to men may put a damper on that process and ultimately pressure him into doing something he may not be ready for.

“It would show me how serious he is,” said Turner. “Some men get more nervous about commitment than women. So, I would leave it up to him.”

Despite the hesitation of many to accept women proposing to men, some believe that women already leave subliminal hints about proposals.

“I feel like a lot of girls really propose without proposing,” said Roy. “They say things that kind of push guys to propose and make it known when they’re ready.”

Regardless of how difficult it may be to fully accept women proposing to men, this may be the reality of the direction proposals could be heading into.

It is the 21st century and women continue to break gender barriers on a daily basis. Along with breaking the glass ceiling or fighting for equality in the work place, this may be the next step some women take in becoming equal to men.