The Dilemma: How to Handle Being Married with Single Friends 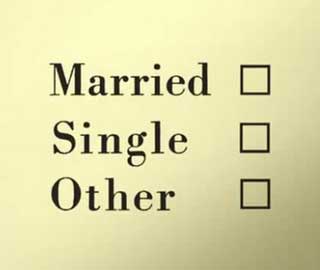 Men who are married with single friends should think twice about hanging with their “boys” if they check something other than “married” on this checklist (Photo courtesy of whateveryousay.wordpress.com).

Is it Wise for Married Men to Hang Out with Their Single Friends?

By Jeremiah A. Scates

Relationships are built off trust, loyalty, and more than often started with companionship. But once the next stage is approached, minor modifications are made such as hanging out with single friends.

Guys are more reluctant to follow the “marriage rule,” but women aren’t far from doing the same.  The only difference is that women more than likely invite their husband to outings. Men use the “guy thing” approach by emphasizing “It’s a guy’s night out.”

This very reason is why the question is posed. After doing a poll with married couples, around 70 percent of wives agreed that as long as their husbands have self-discipline when they are out with single friends then they don’t mind them hanging out.

Men who are married agreed on the subject, which is probably the smart thing to do when you’re married. Always agree with the wife.

Lydia Satele of Carson, Calif. stated that she’s been married for three years and her husband is allowed to go out with whomever he wants to go out with. However, another individual stated her belief is once a man is married, he should stop hanging out with all single friends.

Some single friends don’t respect the institution of marriage. I’ve been married for two months and as a newlywed, I expect my single friends to respect my privacy and decision to only be with my wife.

Marriage does not mean containment of your spouse. It’s a joyous turning point in an individual’s life. If the marriage is based off containment, or in other words “lock down” then the marriage cannot and will not last for eternity.

The spouse will then hang with the single friends as an attempt to get back in their single mode. If home is on the brinks, hanging out with someone single would not be the best decision.

Often men, including myself, want to see if we still have what it takes to score the next best thing to our wife. It’s an ego trip.

But are we wrong to want to keep up with the times?  According to my wife, yes it’s wrong.

Although marriage is sacred, our “man ego” can get the best of us sometimes.  Our ego can persuade us to act as if we’re single to enforce our loyalty to our friends.

When I was single, I tried to make it to every event my friends invited me to. But now as a married man, I know my loyalty is with my wife and I’m available to her first and any married man understands that statement.

The question has been answered. Married men should think before accepting the next invite from their buddy to the neighborhood bar because it is not always wise to hang with one’s single friends.

Scates is a contributing writer for Regal Magazine, a publication dedicated to the African American community