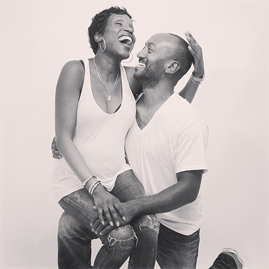 A husband supporting his wife is respected in society.  But what happens when a woman is forced to support her ex-husband with spousal support after a messy divorce?

First, Mary J. Blige went through it and now it’s Mel B’s turn to the feel the wrath of a man scorn.

People Magazine has also reported that Belafonte will receive $140,000 from Mel B to help pay for legal fees.

According to FindLaw.com, “The purpose of alimony is to limit any unfair economic effects of a divorce by providing a continuing income to a non-wage earning or lower-wage-earning spouse.

“Part of the justification is that one spouse may have chosen to forego a career to support the family, and needs time to develop job skills to support his or herself.  Another purpose may be to help a spouse continue the standard of living they had during marriage.”

Often, other women see women who receive spousal support from wealthy ex-husbands in a positive light.  But many view men seeking spousal support as unmanly since men have traditionally been the breadwinners and head of households in past generations.

However, with old school gender roles going by the wayside in many situations and the move towards gender equality and equal pay, is it time for men to receive spousal support when marriages to female breadwinners fail?

RegalMag.com reached out to several men to get their opinion on men getting spousal support from their ex-wives.

Richie Bickham of Dallas and DeRon Nix of Austin, Texas stated that they believe spousal support should only be given to men in situations in which they are raising the children or if they left their profession to help their ex-wives further pursue their careers.

However, in the cases of Blige and Mel B. their ex-husbands should lose any leverage they have in seeking spousal support because of their infidelity during the marriage.

The Rev. Christopher Walls of Allen, Texas stated, “(Prenuptial agreements) are important!  With that being said, I believe spousal support should be commensurate with the amount of time you have been married, the financial value or loss to the household that would occur because of the dissolution of the marriage and the opportunity cost of you having been thoroughly committed during the marriage [like Richie and DeRon stated].

“I do not (think) people should benefit from just having been married to a famous or rich person if they brought no value or true support to or throughout the relationship.

“Now, if people do things the way God intends, they are working, sacrificing and grinding together…you should both share in the dissolution of the assets.”

Shane Dinwiddie of Loveland, Ohio said, “I believe the justice system should compensate men and women equally in regards to spousal support.  Obviously, each case has it’s own intricacies and generally I would imagine inconsistencies exist.

“A consideration is women are well-publicized to historically have inferior pay in the workforce for similar careers men have.  I would trust the courts would consider this and other barriers when determining the amount.”

Regardless of how one stands on men receiving spousal support, changing gender roles will only continue to change the way marriage and divorce are perceived, which will continue to cause controversy.