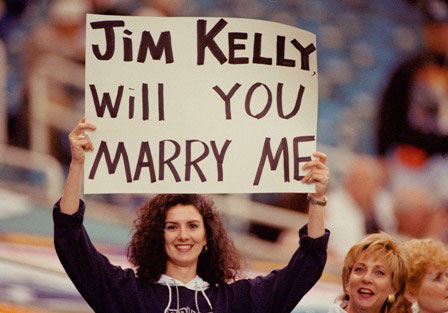 Will You Be My Husband?

When you think of marriage and weddings, certain traditions usually pop into everybody’s mind.

The guy tries his best at a romantic scenario to give his best shot at an awesome marriage proposal.

However, as times change everything in this world seems to evolve, and when we now think of weddings, old traditions go out the window and new ones come through the front door.

So now when we think of something old, something borrowed, something new, the NEW is SHE did the marriage proposal and asked for his hand in marriage.

I know for those men who never want this to happen, the thought of her proposing scares you, but why do women have to propose?

Are you guys dragging your feet even slower these days or are women not only making power moves in the board room, but also in their relationships?

Why do women feel it’s OK to pop the big question?

How are you men feeling about this new type of marriage proposal?

Does it take the pressure off of you or does it interfere with gender roles?

According to divinecaroline.com, Laurie Puhn, a lawyer and writer says, “Women propose to men every day—they just don’t call it that. It’s called an ultimatum. The reality is that women initiate probably over 50 percent of the ‘are we in this for the long haul’ conversations. This gives the man the information he needs to know that when he asks you to marry him, he’s assured you’ll say yes.”

David said, “My wife gave me an ultimatum too, but I asked her to marry me, there’s a big difference. The reason women are doing the marriage proposals are because men these days are weak. Men today rather let a woman take control of everything (like) the relationship, the household and be the breadwinner. A man like that would not mind if a woman proposed to him, especially if she made more money than him. He wouldn’t have to worry about making the bulk of the money. I think it’s good that women are making more money now, but some things need to stay the same (and) men proposing is one of them that shouldn’t change.”

So men, what would you do if the lady you are dating, and love, took you out for a romantic evening and at the end of the date, instead of the usual ultimatum, she got down on her knee and presented you with a ring and asked you to marry her?

“I would say no, and tell her we need to talk about it,” continues David.  “I would feel embarrassed for her, but not embarrassed enough to say yes.  However, there’s a reason I didn’t do the marriage proposal and I would feel she’s crossed a line without consulting me.”

“Exactly,” Kwesiu responds. “I may be in love and tell her I love her, but ready for marriage is totally different. I don’t know how I really feel about women proposing. I try to be an evolved man, but deep down I just feel that’s what the man is supposed to do. Now, I’m all for her making more money and running the house, but if she proposes I wouldn’t know how the rest of the relationship would go.”

After dating someone you love for more than a year and the man has not asked, what do you want your woman to do?

“Wait and trust your man,” says Jehiel. “I would never let it get to the point where she has to ask me. I feel I’m a good man and if we are in love and everything else is in place, we would never get in a situation with her having to ask me for marriage.”

Renna disagrees and says, “Some men’s timetable runs slower. I don’t think it’s anything wrong with a woman asking a man to marry her. It’s 2014, women are doing everything now and maybe she’s ready then, because if he’s not, she can move on and find someone else who will marry her.”

What do men think of the woman who is willing to ask a man for marriage, and if he says no, she moves on to date someone else.

Kwesiu says, “I don’t think she’s necessarily controlling, she just wants to get married. I admire women who do the marriage proposal, because these women are braver than their grandmothers’ generation. I just wouldn’t want to go into a marriage with her asking.”

According to huffingtonpost.com, a survey taken in 2012 showed no men wanted their girlfriends to propose to them.

However in 2014, cbsnews.com reported that three fourths of Americans say it would be fine for a woman to propose.

The good news is people are becoming more acceptable to women proposing, but I don’t know if that’s good news for you fellas.

With more women proposing to men, there’s a small chance your girlfriend may be planning a marriage proposal of her own.

So talk to her when you all discuss marriage and let her know where you stand, before you are standing and she’s down on one knee.