How to Choose the Best Man As Your Actual Best Man 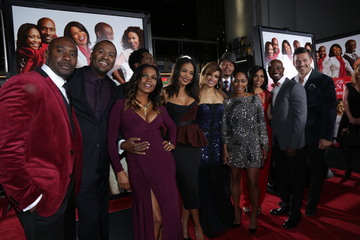 Choosing the wrong best man has led to a film franchise for filmmaker Malcolm D. Lee (second from left) and the cast of “The Best Man Holiday” (Photo Credit: Alex J. Berlinger/ABImages via AP Images).

One can only hope that your wedding day does not go the route of Lance (Morris Chestnut) and Mia (Monica Calhoun) from “The Best Man.”

A way to avoid a debacle on that special day is by picking the best man to be your actual best man.

While the maid or matron of honor has more duties than her male counterpart, there are a few deal-breakers and hurdles that your best friend, brother or cousin has to clear before it is smooth sailing to the finish line.

The first deal-breaker is if your potential best man has been intimate with your future wife.

Although the friendship might be strong in your opinion, what if your fiancé begins thinking that your best man is actually a better man than you and begins reminiscing on all of the great times that they shared?

And even though the bachelor party is important, maybe having the person in your crew that “turns up” the most planning that event is not the best move either.

After all, having a hangover the next day for the wedding is not a good thing, especially when he has to remember to bring the rings and give a halfway appropriate best man speech at the reception.

So who should you choose as the best man?  I’m glad you asked.

The best man at your wedding should first be someone who has been with you through thick and thin like a brother, long-time friend, fraternity brother, cousin or even your father if the two of you are close.

He should be someone who is responsible and dependable.

He should also be someone that knows how to have a good time because the bachelor party should still be epic.

The best man should be someone who is close enough to you that you want to honor him for his friendship and loyalty.

However, choosing the best man can lead to some controversy.

What if you have more than one best friend?

What if your best friend is a lady?

What if you are close to your best friend but not to your own relatives?  Will that cause controversy?

Maybe it will cause controversy but not if it is done properly.

If you have multiple best friends, choosing a relative can help you avoid upsetting one of your best friends.

Having two best men like Martin Lawrence did with Tommy (Thomas Mikal Ford) and Cole (Carl Anthony Payne II) on his sitcom “Martin” might work.

But if one of your best friends is irresponsible like Cole, do not give him any responsibilities accept standing next to you at the front of the church.

If your best friend is a lady, maybe your fiancé will let her be a bridesmaid or she can be your “best lady.”

If you do not have many close friends, choosing a future in-law might work if you all have a good rapport.

If all fails, flip a coin and be done with it so no one gets offended.

Regardless, choosing your best man should be fun.

And while weddings are usually not a man’s cup of tea, choosing a lifelong friend or beloved relative to share your special day with you is a great way of honoring someone who has stayed down with you from the get-go.