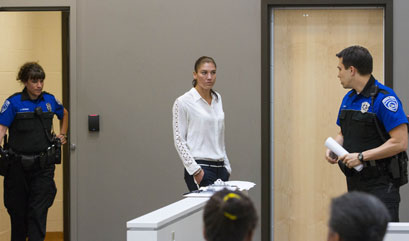 Silence Can Be Deadly, Even for Men

In 2003, Susan Wright tied up her husband Jeffrey in their Houston home.  According to Harris County, Texas prosecutors Wright seduced her husband that night by tying him up and sensually dripping hot wax over his body.

She then commenced to stabbing him approximately 200 times and according to the victim’s father even once in the eye when he was still alive.

Susan, who claimed she was the victim of an abusive husband, allegedly lied for six days leading up to the discovery of Jeffrey’s dead body, buried in a neighbor’s backyard according to CNN.com.

“I think men are looked as stronger physically than women in most cases so in a physical battle if a man is dominated by his wife or girlfriend then he is considered weak,” Avery Lindsey, 35, said.  “Women though are very intelligent creatures(s) and verbally are known to dominate in most cases, so the way I look at it, this can go hand to hand because all domestic disputes don’t end up in…fist fights.  What about the verbal abuse so many men take from women?  Words do hurt!  Remember, domestic violence is a pattern of behavior, physical or verbal.”

Former NFL star Ray Rice was recently suspended indefinitely by the NFL and fired by the Baltimore Ravens for knocking out his future wife.

However, soccer star Hope Solo faced no suspension or punishment from the United States soccer team after punching her 17-year-old nephew and leaving cuts and scratches across his face. That punch allegedly led to a family brawl that included Solo’s half-sister, the young man’s mother.

That apparent double standard has led many men to openly question why male victims of domestic violence are not taken seriously and what can be done to broaden the discussion on domestic abuse.

According to the National Domestic Hotline, one in seven (13.8 percent) men over 18 in the United States “have been the victims of severe physical violence by an intimate partner in their lifetime.”

However, in other countries like Great Britain, the number of male victims of domestic violence is staggering.

According to The Guardian, “About two in five of all victims of domestic violence are men, contradicting the widespread impression that it is almost always women who are left battered and bruised, a new report claims.  Men assaulted by their partners are often ignored by police, see their attacker go free and have fewer refuges to flee to than women, says a study by the men’s rights campaign group Parity.”

Unfortunately, Lindsey has seen this sad reality play out firsthand.

“I have a few experiences where I can remember of a female abusing a man, but the one that sticks out the most is the time I was working at Target,” he said.  “A friend of mine and his wife were always very verbally abusive to each other.  She was also bigger in height and weight, so when they finally got into a physical altercation, he was no match for her.

“He suffered bruises to his face and she tore his shirt completely off.  It took three employees to hold her off and only one to restrain him…She ended up calling the police and even though we testified she was the aggressor, he was the one cuffed and hauled off.”

In other cases where Lindsey has been around male victims of domestic violence, he said that police officers laughed at the victims when they called the authorities on their female abuser.

What is not a laughing matter is the number of men who are murdered at the hands of their female partners and vice versa.

According to the Office for the Prevention of Domestic Violence, “In 2007, intimate partners committed 14% of all homicides in the U.S., killing an estimated 1,640 women and 700 men.”

On Sept. 23, Ta-Nehisi Coates, a reporter for The Atlantic wrote about the Solo controversy stating, “There is a reason why we call it the ‘Violence Against Women Act’ and not the ‘Brawling with Families Act.’  That is because we recognize that violence against women is an insidious, and sometimes lethal, tradition that deserves a special place in our customs and laws.”

Unfortunately, our history shows that male victims of domestic violence can face lethal consequences too.  Are their lives not special enough to warrant equal treatment under the law?

Derek, 33, believes Solo deserves her due process, but soccer should follow the lead of other sports league when issuing a punishment, especially if Major League Soccer has set a precedent on the matter.

Many have rightfully criticized Rice for almost killing the mother of his children with that vicious punch in an Atlantic City, N.J. elevator but just as many should criticize women for doing the same, or worse, to the fathers of their children.

Jeffrey Wright was a parent just like Janay Rice.

And like the many women who have been murdered by their partner, their loved-ones still grieve their tragic and unnecessary deaths; male victims of domestic violence have family members who grieve their untimely deaths too.

The pain is the same.

The deaths are the same and are all permanent.

So, why are the punishment, outrage and the ridicule not the same?