Tell the Truth, Can You Handle a Female Breadwinner? 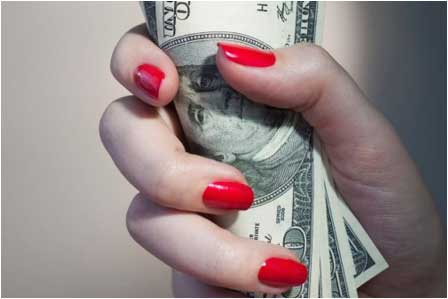 In modern times, many women are bringing home the bacon for their families.

Fellas, Can We Really Handle a Female Breadwinner?

Female breadwinners are women who earn a significant amount, if not a majority, of the household earnings.

Needless to say, this is actually a large group of women that is rapidly increasing in our country.

Not to mention more women are graduating from college than men. But where does this leave the men who, if not equal, are striving to achieve that head breadwinner status?

The truth is, a lot of women are shouldering the financial load of their families, and the roles of women and men have gone through a shift.

Although some men may feel intimidated by a female breadwinner, it does not make you a chump for being with one. Women like to return the favor and spoil their men too.

How is this dynamic affecting dating and relationships?

Can men really handle it when their woman makes significantly more money than them?

With the rise of single mothers and women with college degrees, there are more female breadwinners than ever before.

According to the New York Times, “Four in 10 American households with children under age 18 now include a mother who is either the sole or primary earner for her family, according to a Pew Research Center analysis of census and polling data… This share, the highest on record, has quadrupled since 1960.”

Those are alarming numbers to us men who are doing everything we can to make ends meet.

Some may say that the recession has a lot to do with the current state of dating and relationships.

In all honesty, it should not matter whether or not your lady is cashing out; everyone has a position to play.

We are all in control of stepping our game up with the right attitude. But where does that leave a man who is constantly gauging his manhood by the amount of funds he makes?

Does it make you less of a man??

As men, we are naturally programmed to become providers.

We dream about the day where we can take care of not only our lady, but our family as well.

As stated before, most of the women today are succeeding in the workforce and it instantly sends a message to men and their work ethic.

Simply put, there are more women that are financially kicking butt.

Surprisingly, there are men who do not feel any static when it comes to female breadwinners.

Relationship consultant Byron Cage said, “NO, there is nothing wrong with that at all. But most will have problems with it because it’s going to be a problem when you try to be the head of the household, and may feel like less of a man.

Entrepreneur Luis Ayala said, “No, if she can help you, instead of being an anchor to your pocket and to the situation, she can help you come up. But if you’re leeching off what she does then yes.”

When it becomes a burden

It’s understandable why men may feel a certain way about female breadwinners.  Sometimes, there are mixed feelings and viewpoints due to generational differences.

For example, a man from the traditional generation may feel that women should be a stay-at-home mom, versus a millennial that doesn’t think anything is wrong with women climbing the corporate ladder.

Overall, it is a new era where women are sometimes dominating.

As men, we can only show our respect and do the best we can to achieve the lifestyle we want.

No one man can do it all alone, so it shouldn’t stifle your ambitions towards having success.

The only way your man card should be revoked is if you are not humble enough to understand today’s reality.

Secondly, if you feel it is unacceptable, maybe even a burden, you should reassess your goals and keep hope alive!