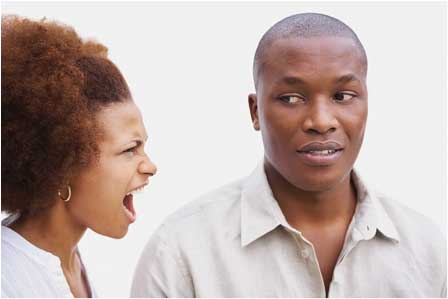 Several men have become submissive in relationships due to women dominating men. Let’s face it, women are not dumb. They know exactly what to do every time there is a petty speed bump in a relationship.

Being submissive and manipulated is something men have secretly struggled with and it is time to man up and be honest about why this happens.

While many men may find a relationship with a domineering woman pleasurable, being dominated can be a burden once it stifles your individual being.

Virtually, there are many reasons that contribute to how women dominate men.

Some would say these women dominate men based on how men were raised around women. Just so that we are clear, this can be anywhere from rolling out the red carpet for women, being afraid of saying the wrong things around women, or handing over all male power to women in exchange for approval.

What’s interesting is that most women discover at an early age their trump card and how much it enables them to get what they want.

In retrospect, women dominate men with this card because of men’s lack of manliness and discipline.

In today’s media world, each popular dating site, online magazine, and newsletter explains how women from all backgrounds feel about this situation. Interestingly enough, one can detect that most guys deal with women like this in order to advance with them physically. Those of us who are in the dating pool understand how it applies to unattached relationships.

According to on-air personality Angelica Grant, “The dominance is a defensive mechanism. Men should know their power and the proper way to execute it. Guys get so caught up in the physical or just being lazy, that they don’t use the skill of simply getting in her head. If she’s too dominant be the one to tame her, that’s really what’s she’s begging for. Give her security and she’ll buy you a house by the fall.”

Educator and Texas Southern University alum Kandice Funderbunk says, “Some men just need to grow some manhood. Men long for companionship so much that they will do anything to get it. This usually stems from youth and how a man was raised. If his parents didn’t teach him how to think for himself or take charge towards women, he may become tamed by a domineering woman himself.”

Now this is not to say you should be barbaric and inflict any physical or emotional pain on women. Just be courageous enough to stop them in their tracks when they need to be checked.

Women will respect you and welcome it as long as you are not dictating to them. By dictating to women, it will create a silent resentment and possibly an end to an amazing relationship.

There is nothing more dangerous than women dominating men. However, you will have all the power you need by stepping up to the plate and putting your lady in check.

As my good friend Teddrick Allen would say, “A woman will never respect you if she can walk over you.”

The foundation of respect can easily be lost when a woman feels that she can shoot craps with your manhood.

In a nutshell, men must let women know they will not accept any domineering behavior from the very start of a relationship. If you are dealing with an insolent woman, you should gracefully cut your ties.

As they say, the way you start a relationship is how you end.