Loyalty in Relationships: Are Black Women too Loyal to Black Men 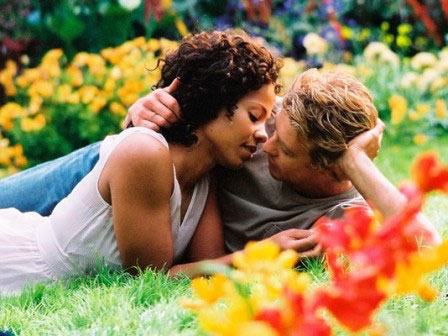 Loyalty in relationships: The film Something New depicts a Black woman who finds love in another race, after years of dedication to Black men.

When is Loyalty Too Much?

Dating outside one’s race really has come a long way. Through centuries of racism, segregation, immigration, and pure hate, it was unheard of for any race to openly date and/or marry another race.

Worries of social acceptance, ignorance, and fear of the unknown, have kept many people from stepping outside of their racial makeup to fall in love with someone who does not look like them. Many still suffer from these woes, but from personal experience, let us take a closer look at one race and gender more in-depth… Black women.

Why, as Black women, do we have such a hard time dating any other man besides our “brothers”?

Why, as Black women, can we not see ourselves loving, marrying, having children, and creating a home with a man that does not hold our complexion?

Why, as Black women, do we place such a large amount of weight on the beauty of a Black man instead of looking around to find the beauty of a White man, an Asian man, or even an Indian man?

Are we, as Black women, too loyal to our Black men?

“Yes. I think that we are too loyal to Black men. And, what makes it so bad is they couldn’t care less! Black men date any type of woman they want. We [Black women] are sitting here waiting on them to pay us some attention and they are out dating anything underneath the sun! Why wait on them? We need to learn how to do the same,” a friend, 24, responded.

Despite them being stereotyped as angry, scary, and unintelligent male species, Black men have broken the boundaries of race.

It’s a well-known fact that many Black men do not seem to carry any sort of restraint from dating whichever woman attracts their attention.

Yet, many Black women feel as if dating outside of their race is a downgrade. Like there is some sort of unwritten, yet widely recognized rule forbidding us to date any man besides the ones that are our race in order to remain loyal in our relationships.

But, as just plain and simple women, we desire to be with a man that is strong, loving, a provider, loyal, trustworthy, and so on. Why can’t we find this in a man that is not Black?

“I’m just not attracted to non-Black men like I am to Black men. I would date and have fun with a non-Black man. But, I couldn’t marry one. I don’t get the same butterflies I get for a Black man,” another friend, 30, replied.

Everyone knows that attraction is key in any given relationship. So, we cannot judge anybody for not being attracted to a certain type of man.

But, where does attraction stem from? Is attraction directly correlated with individual desires that derive from personal thoughts, morals, and a person’s natural instinct?

Or is attraction a general feeling one feels from a combination of things, like our media, our family beliefs, our natural environments (neighborhoods and common hangouts), and what we have been brainwashed by society to say what is “good” or “bad”?

Because, if that is the case, maybe Black women feel more attracted to Black men because our fathers, uncles, grandfathers, brothers, or cousins were our role models. So, we feel a sense of pride when one represents as well as they did.

Or maybe our attraction comes from the media that hardly ever glamorizes relationships between Black women and non-Black men.

Possibly, Black women’s attraction for Black men is because we are unevenly exposed to more Black men in our lives than non-Black men and we find comfort in what we’ve been adapted to.

If this is all true, than our “attraction” may not be attraction at all. It could just be “what we know” and our sense of loyalty to the Black community. And, maybe, we could become accustomed to another race with the right amount of time and effort and, in turn, become attracted and loyal to them as well.

“It was a Black man that raised me, loved me, and nurtured me. I can’t turn my back on what he has done. My father is the epitome of a loyal Black man. I plan to find someone just like him and that includes race,” a close friend, 32, intently stated.

Whatever the result is, Black women have been loyal to our Black men in the hopes that they will reciprocate the same action.  And, well, some do not.

But, let us not forget that some Black men do. At the very least, our lovers, sons, fathers, brothers, and the Black men that truly matter to us do care about the wellbeing of us Black women in both word and deed.

It is these men that have shaped the very fibers of our being with their unconditional love and pure affection. And, they are loyal.

So, are we loyal to Black men? Yes, we are… But, are we too loyal? No one can answer that.