Female Infidelity: Is it a Deal Breaker? 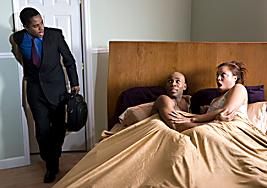 Cheating can be the biggest and hardest issue couples face in their relationship.  You know how it goes; He says it didn’t mean anything. She cries, a lot! He buys her things and promises not to do it again. She yells, and then maybe destroys some of his things.  He gives her one last chance to believe him, then she forgives him, and they work it out. Now, how do you think the story would go if the cheater was the woman? Does it end with him forgiving her?  Is female infidelity the same or worse according to men?

One of our favorite guilty pleasures is watching the “Maury Povich Show.” When we tune in to watch who the father is on the paternity test episodes (which is almost everyday), we realize that female infidelity is just as normal as their counterparts.

When did this become normal? Why are most of the articles, books, and conversations about men cheating and not women? Is it that, TV shows like Maury only display the few women cheaters that exist?

“No women cheat,” says Ozy. “It used to be thought that women cheated a lot less then men, but statistics show, percentage wise, that women cheat just about as much. Women are just better at getting away with it.”

So with that being said, if your woman cheated how would you feel? Would you want to stay or kick her to the streets? Men, how do you deal about female infidelity?

“It depends on how much I loved her and her reason for cheating,” Joe chimes in. “Women cheat for different reasons than men, and maybe it was something going wrong in our relationship.”

“No,” says Kwesiu. “I get that men and women cheat for different reasons, but I truly believe that when a woman cheats she clearly wants someone other than you. Not saying that they don’t love you, but they really in all honesty don’t want to be with you.”

This is interesting because majority of women are willing to stay and work it out if their man cheats, but men are not. Why is that?

“I think there will be more men to cheat until the end of time, because of our make-up. We are physical creatures where as women are emotional creatures,” Kwesiu continues.

That’s a bit unfair, and a double standard. Why do men think their cheating is understandable? I asked Kwesiu, why do men think it’s OK for them to cheat and horrible for their woman to do the same thing?

“It’s funny we are talking about this because my pastor just talked about this last week, and I agree it’s wrong, weird, and twisted. My pastor said ‘how can a married man have a girlfriend, but then trips if a man texts his wife?’ I can’t handle female infidelity so that’s why I don’t cheat because I’ll flip if she cheats on me!”

My question to the men who can’t stay is why? What is the biggest reason you can’t get over female infidelity, and make it work with a woman that you love?

“When it’s time to engage in sexual intercourse after a woman has cheated, the man doesn’t forget and can’t help but to think repeatedly about the other man rocking his woman’s world,” says Lorenzo. “He would always say to himself ‘I can’t make this H** a HOUSEWIFE’ and the sex would never be the same (mentally). Plus men don’t deal with emotions well and we can’t handle our feelings being hurt.”

Let’s dive into situations that would normally make a woman try and work it out. Like, having kids, property and businesses together and nowadays we have house husbands who solely depend on their wives. If these were relevant would female infidelity still make you leave her?

Lorenzo says, “Nothing on that list would make me stay! I would holla at her later!!! She’s a grown woman and she knew what she was doing. I do know a man who stayed with his wife after she cheated and he stayed because of the kids. I think it’s an admirable thing to do especially if kids are involved, but he’s a one in a million type of guy! Now is he considered a good man or a fool? A FOOL!”

One of my favorite excuses I like to hear from men when they are caught cheating is that they are a sex addict. Hey, it worked for a second with Tiger Woods and Eric Benet. Could it work for female infidelity?

“If she is a sex addict then she can get help alone,” says one individual. “People who are sex addicts should be alone until they get it under control. I’m not going to get hurt while she’s getting help, sorry!”

The saying goes; women cheat just as much as men, but they are just better at getting away with it. So for the women that are getting away with it, be forewarned, if you are caught cheating your man might leave you without hearing your reasons. You may want to think if the other man is worth losing the man you love.