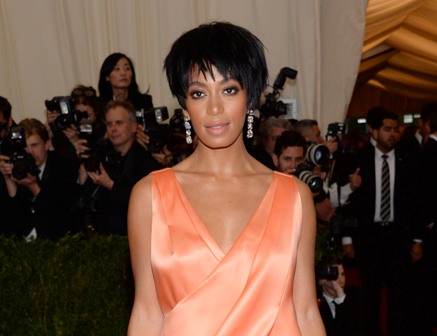 Solange Knowles made headlines when a video surfaced of her hitting brother-in-law Jay Z at The Metropolitan Museum of Art’s Costume Institute benefit gala on May 5 (Photo Credit: Evan Agostini/Invision/AP).

Turn the Other Cheek or Turn to Self-Defense

Whoopi Goldberg ruffled some feathers recently with her comments about the incident involving Jay Z and his sister-in-law Solange Knowles.

In May, TMZ released a video that allegedly showed Beyoncé’s sister attacking her husband Jay Z in an elevator after the MET Gala.

What do you think? Does the old saying, if someone hits you, you hit them back still stand when we are talking about a man hitting a woman after she hit him?

Is it always inappropriate for a man to hit a woman regardless if she throws the first and second punch?

Or, from this day forward as we address domestic violence should we also address women and start to point the finger at them as well?

Men, if a woman hits you, should you have the right to defend yourself and hit her back?

Yes, typically men are stronger than women. Is this the reason women feel it’s OK to hit a man even if on the outside looking in, it can be labeled as domestic violence?

“Yes, the reason it’s OK for a woman to hit a man is because he’s bigger,” explained Rhonda. “Women are normally smaller and weaker than their male counterparts, so me hitting a boyfriend out of frustration, I’ve always thought really shouldn’t hurt them.

“I’m sorry, but I always thought me hitting a man was like a fly in your face; annoying, but doesn’t hurt. Men have the ability to hurt women deeply and emotionally and sometimes when you can’t hurt them back emotionally it’s frustrating, and out of that frustration comes the hitting. To me domestic violence is when a man attacks a woman, because she can get hurt!”

I asked Rhonda what would she do if a man hit her back.

“I would be shocked and wonder how he was raised, and probably call the cops. I know this is a double standard, but his hits could cause potential damage. After hearing myself say this I may need to learn to walk away beforehand.”

After the Solange and Jay Z video went viral instead of watchers saying that Jay Z did well to not hit her back, people actually defended Solange and said she must have had a good reason to attack him.

Are there valid reasons women can start domestic violence?

“Yes, if she’s provoked,” stated Kevin. “Not saying she’s right, but if we are talking about a good girl causing domestic violence, I believe there’s a reason. I don’t know what I would do if a girlfriend hit me, because I would never give her a reason to hit me. I would try and be honest and talk with her and if I see that’s not working, I would leave to allow her to cool off.”

I know the ladies are saying this is how all men should react, but not all men agree with Kevin.

“It does not make the situation right if a man swings back and hits a woman, but a man will only take so much,” said Nicholas. “If a man gets fed up with domestic violence he may swing back and that could be a wrap for her face. If you let a person get away with something one time too many they feel they can always hit you. I would warn her, and after the third warning, I would actually choke her to let her know this hitting each other is not a game she wants to play.”

“Hitting her back is never the solution no matter what,” explained Tangela. “People like Ray Rice acted out of frustration. It’s not OK that she hit him, but just as I tell my youth when being faced with choices, he should have considered what he had to lose and all his other options. There is always a second and third choice. He should have refrained from hitting her because he could have killed her. I wonder if this was his first time he hit a woman because it had to start from somewhere.”

Singer Chris Brown said, “Watching my mother endure that abuse was an influence in me about how to treat a woman.”

This could possibly be a reason why he retaliated on his ex-girlfriend Rihanna. What are we teaching our kids about hitting?

“I have a 5-year-old son and I find it difficult to explain to him that if someone hits you to hit them back, but at the same token, if a girl hits him I want him to understand still to not allow anyone to hit him, but don’t hit girls back.” said Jamie. “I told him to look at it as a man hitting me. Women need to keep their hands to themselves because it places a well-raised man in a difficult situation. Society will automatically condemn the man even if the woman hits him first.”

Surprisingly, Rice and his fiancée (now wife) Janay Palmer were BOTH arrested after their domestic violence incident.

What does this mean that both were arrested? That the face of domestic violence is changing. Women need to know there’s a high chance of a man hitting them back if they strike first.

Also, men should know the stigma that comes along with hitting a woman back because they won’t call it self-defense. You will both be arrested for domestic violence.

To women and men; when you find yourself getting frustrated and not knowing what to do, instead of trying to cause physical harm, maybe you should just leave because life is so much better outside of jail.