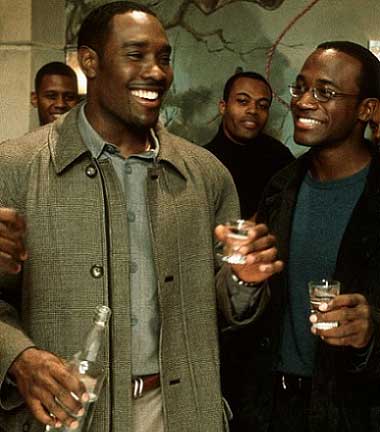 The poster child for best friend betrayal is Harper (Taye Diggs, right) from The Best Man after he sleeps with Lance’s (Morris Chestnut) future wife (Photo courtesy of Madamenoire.com).

The famous best friend phrase goes…“Friends ‘til the end.”

However, sometimes in life the “end” part happens much sooner.

There are a lot of things that can break up a great friendship. Things such as money, envy, and the one you may have never seen coming…a woman.

Men seem to form a stronger united relationship with their friends, and it’s hard to believe that a woman can come between this front, but it can.

So let’s take that phrase again and say “Friends until… a ‘phyne sistah’ you’re dating, wants to date me, and I want to date her too.”  Is this OK? If you were seeing a woman, and found out your best bud was in love with her, would you bow out, or throw them bows? Could your friendship withstand this type of best friend betrayal?

“In college, after I pledged, no way on Earth could I date one of my friends’ girlfriends or ex-girlfriend,” says Joe. “But now that I’m older and know good women are harder to come by, I would examine it now. If I thought she could be the love of my life, then by all means I’m going to make it happen, even if my friend (is) upset about it. My thing is if it didn’t work out with them, why not let her go? To me it’s not best friend betrayal, it’s potential love.”

When two people are in love regardless of their circumstances, love seems to always find a way to prevail. However, what happens when the friend is still in love with her? Where does that love go?

“It stays,” says Pat. “I went away for work and found out while I was gone my best friend had slept with my girlfriend. I felt sick to my stomach that the two people I love the most betrayed me. I have not been able to forgive them to this day and that was over 10 years ago. I could not get over what he did. It was the ultimate best friend betrayal. However, I did marry her. I still hate her guts when I think about it to this day, but we are married with kids.”

Remember in The Best Man, the audience was shocked when Morris Chestnut married his fiancé after finding out she slept with his best friend.  His love outweighed his anger.  Do you think you could love a woman and your friend after this type of best friend betrayal?

“Nope, it happened to me and I let her go,” explains Dave. “When I found out my best friend was messing with my girlfriend, it surprised me because I couldn’t believe my best friend would do that to me; we were boys! I didn’t feel betrayed by her, but definitely by my homeboy. I eventually forgave them, but whenever I was around them I felt funny. They ended up in a relationship, but karma ended up coming back, because she cheated on him.”

Fletcher says, “When my best friend slept with my girl behind my back, I was devastated at first, but now they have a baby together, but not a relationship, so they deal with the classic baby momma/baby daddy issues. Their relationship is horrible now, and I’m in a great relationship ready for marriage.”

Doug says, “My frat brother is married to (a) woman who actually dated one of our line brothers. When they realized how they felt about each other they went to him and explained, and he was big enough to say it was OK. They are now happily married with two kids. No harm no foul.”

Love does make things happen, but it doesn’t have to be betrayal.

If you feel a certain way about a woman, be man enough to tell your friend. Or, if your friend tells you he really likes a woman you have dated and he wants your blessing, look in his heart and if you can tell he really cares for her, move aside because the best friend betrayal could come from you standing in their way.