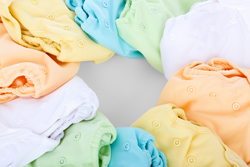 Pampers has pledged to install 5,000 changing stations in public men’s restrooms by 2021.

It all started with a viral picture of a father and his child.

In the picture from Oct. 2018, Jacksonville, Fla. father Donte Palmer posted a picture of him squatting against a wall in order to change his 1-year-old’s diaper.

Palmer said on Instagram, “This is a serious post!!! What’s the deal with not having changing tables in men’s bathroom as if we don’t exist!!! Clearly we do this often because look how comfortable my son is. It’s routine for him!!!! Let’s fix this problem! I Kaepernick drop a knee to this issue! Let’s show the innovation of fathers!”

He had to use his legs as a makeshift table because the men’s restroom did not have a changing station.

The viral photo started a movement with the hashtag #SquatForChange in which men shared their difficult experiences with their children.

And it has culminated in Pampers pledging to install changing stations in 5,000 public restrooms across Canada and the United States.

Pampers said they will complete their initiative by 2021.

According to Pampers, 90 percent of fathers said they have entered a public men’s restroom only to find no changing station present.

Musician John Legend said, “Dads have to resort to all of these maneuvers because there’s no changing stations in our restrooms.”

Despite the difficulties fathers find in public restrooms, change has occurred since 2016 thanks to legislation passed under the administration of former President Barack Obama.

The Bathrooms Accessible in Every Situation (BABIES) Act mandated that changing stations be placed in some, but not all, public bathrooms in a building.

Furthermore, the BABIES Act required signage that pointed the public to the nearest public restroom with a changing station.

The problem is that most of the changing stations are located in women’s restrooms.

Therefore, many fathers hope that the effort from Pampers, Legend and the social media movement will make their public parenting duties easier.

Legend finds it surprising that this conversation had not occurred sooner.

The musician said, “It didn’t occur to me that [including dads in advertising around diapers] hadn’t happened yet…but I’m glad that we’re highlighting this issue. Overall, it’s part of a movement that we recognize [the] duties of parenting and running the house should be shared more equally between partners…

“We want to make sure that we do our part to make that message heard,” the EGOT winner continued. “I think making the change stations available is gonna make a difference for a lot of people.”

Legend decided to get involved after a conversation with his wife, model Chrissy Teigen.

“It all started from an organic situation which was that Chrissy and I both shared diaper-changing duties [with our daughter] Luna,” Legend sad.

Now, Pampers has pledged to make those duties a little easier for doting dads and Legend is pleased to be a part of this movement.

“I am so excited to play a role in Pampers’ Love the Change campaign,” Legend said. “I love being a hands-on dad, and it is so important that we acknowledge the active role dads are playing in their babies’ lives.

“Spending time out and about with my kids is one of the greatest joys in my life, but it’s frustrating when I am out with [my son] Miles and the men’s restroom doesn’t have a baby changing table. I’m proud to support Pampers as it paves the way for more inclusive parenting by providing all of us dads out there with the tools we need to succeed.”

Pampers recently released a statement about their new movement for fathers.

“Across the next two years, Pampers—in partnership with Koala Kare—will identify high-need public locations and provide baby changing tables for installation in the men’s restrooms.

“Dads and babies visiting places such as parks and recreation centers, community centers and libraries in cities such as Cincinnati, Dallas, Philadelphia, Detroit, and many others across the U.S. and Canada, are in line to benefit from Pampers’ commitment. The first 500 locations have already been identified and installation is expected to be completed over the coming weeks.”

By adding changing stations to men’s restrooms, Pampers has changed the narrative of parenting and given many fathers a voice that had gone unheard for generations.

“We know that dads want to be able to bond with their children by taking them out and about, and that means the inevitable diaper-duty no matter where they are,” said Andre Schulten, Vice President and General Manager Baby Care North America, Proctor & Gamble. “In many instances today, instead of it being an easy, straightforward task it’s a moment that causes angst because the facilities needed are not always available.”

Fathers in Philadelphia rejoiced at the news about the future increase in changing stations in men’s restrooms.

“When my son was younger, there were times I’d have to change him on the floor sometimes,” said Reggie Smith, an employee at IDAAY Incorporated in West Philadelphia.

IDDAY is an acronym for Institute for the Development of African-American Youth.

“I think Pampers is taking a step in the right direction, so kudos to them,” said Sean Parker, a parenting coach with Young Fathers United.

Father Shariff McPherson added, “It should be a major help. I think that should be everywhere, honestly.”