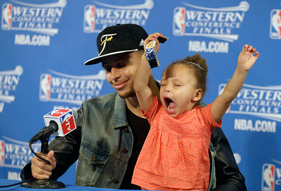 Many have praised the positive image of strong fatherhood shown by NBA MVP Stephen Curry of the Golden State Warriors with his daughter Riley Curry (Photo Credit: AP Photo/Ben Margot).


It’s the Thought that Counts

Mother’s Day is a day in which people universally praise the role of women in their children’s lives.

With so many children raised by single mothers, it is totally appropriate to shower mothers with the praise they deserve.

However, many men feel short-changed when it comes to their special day.

Furthermore, many single fathers have felt even more shortchanged because some single mothers are celebrated on Father’s Day, but the same celebration is missing for single fathers on Mother’s Day.

In an article entitled “Please DO NOT Wish Me a Happy Father’s Day…A Note To Single Moms Holding It Down Alone!” Cassandra Mack wrote, “We are still not our child’s Father.  We are our children’s mothers.  No doubt, our role is vital.  We are the nucleus of our family.  No one can argue that…But what can be argued from a clinical and epidemiological point of view is the irreparable damage that is done when we undercut the role that a father plays in his child’s life…even when he is not present, even when he is not doing all that he can to help his children thrive…

“Unless it’s an issue of abuse, drug use or child endangerment, it is important that every father has a pathway to bond and or reunite with his children.”

It is also important to note that single father households are on the rise and account for nearly a quarter of such homes according to Huffington Post.

Nevertheless, many men still feel that their roles as fathers are being diminished by today’s culture, and great fathers are not celebrated equally.

Therefore, RegalMag.com looks at the historical background of Father’s Day and how the difference between the days for parents are perceived by fathers across the country.

According to NationalGeographic.com, “After a Mother’s Day sermon in 1909, Spokane, Washington, resident Sonora Smart-Dodd—one of six children being raised by a single dad—wanted to honor her father too.

“Smart-Dodd encouraged local churches to institute the first Father’s Day observance the following year, and the idea caught on.

“It wasn’t till 1972, though, that Father’s Day was officially made a U.S. holiday, when President Richard Nixon helped set aside the third Sunday in June for dads.”

Some critics believe that mothers receive more attention on their holiday because they are relieved of stereotypical household duties.

But while many dads are OK with getting less attention on their holiday than their female counterparts, many men believe that more household duties from today’s fathers should equal more attention, and/or more money spent, on Father’s Day.

National Geographic’s survey of 35o fathers found that today’s dads still have to perform their stereotypical roles like automotive care, lawn and household maintenance but are also expected to do things like household cleaning, taking care of the children and cooking for the family.

Eighty percent of the participants said that mothers get more attention on Mother’s Day than dads on Father’s Day.

Nevertheless, 81 percent of adults feel that fathers should be celebrated equally based on a survey by RetailMeNot.com.

Despite the perceived inequality in gift giving, the RetailMeNot.com survey revealed that more women (52 percent) wanted their families to spend money on them versus fathers (35 percent).

According to Detroit.CBSLocal.com, “The survey found that quality time with the family (dinner, grilling, outing) is the gift dads are most hoping to receive this Father’s Day.  In a list of common gifts children have given their fathers in years past, ties and ‘#1 Dad’ T-shirts are the least-hoped-for presents by dads.”

While many fathers are not overly concerned about the gift that they receive, it is the thought that counts.

We should ALWAYS think highly about the outstanding mothers, especially single mothers, that many of us are blessed with every year for Mother’s Day.

But in doing so, one does not have to ignore great fathers on their special day in the process.