Women Sound Off on Their Favorite Fraternity Men 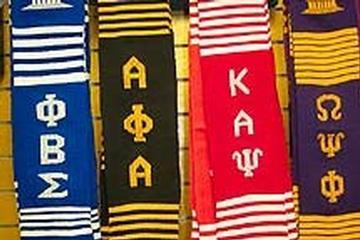 Ladies, when you first went to college, I’m sure you promised your family that you would study, study, study. But when you got there you couldn’t concentrate because of all the apes, dogs, or bunnies stepping all over the place.

They were racking your brain; in fact they were all you could think about.

Which one of these fraternity men was your college crush, and then turned out to be your knight in shining armor in life?

Are all fraternity men the same or does one fraternity stand out far from the rest?

Like all women before they get to college, they hear the stereotypes of these fraternity men.

Even if you didn’t go to college, you still saw them at parties and step shows. Their ambiance took over your soul as a young woman when you saw these good looking men, who were educated, and could step like nobody’s business.

What was it about each group of these fraternity men that made them stand out in your heart?

“Everybody knows that Kappas are the pretty boys and the Ques are the dogs,” states Shay. “I know nothing of Iotas.”

“Alphas tend to be more into education,” says Metra.

“Sigmas are very country to me, all of them,” exclaims Hill.

“Most of my friends think that Omegas are the real Alpha males,” says Nikki.

“Kappas are like a male version of AKAs,” continues Shay.

“Kappas only date certain types of women,” says Leila. “And Omegas still like to party well into their 30’s and have the stereotype of being down and dirty.”

When I interviewed the men about their favorite sorority women they were divided. After I talked to a dozen women, you will be surprised to find out they unanimously picked one group of fraternity men that fit their ideal Black man.

Which group of fraternity men could actually have all of these women gushing over them still years after college?

Let’s find out who these women have loved since college and still can’t shake from their soul.

“I’ve dated an Alpha, Kappa and an Omega throughout my life,” continues Shay. The Omega was cool. He and his frat brothers grew up a lot from college years and all seem to really love their wives and kids.

“However, most of them couldn’t shake the dog in them because I found out later a lot were cheating on their girlfriends. I dated a Kappa and being a Kappa was his greatest achievement (you would think). I got tired of him talking about how everybody thinks Kappas are pretty, when in reality only Kappas talk about this, and he wasn’t all that cute, which is why he probably pledged Kappa. I married an Alpha and he loves me. That’s all I care about.”

“From a small child, my mother told me that if I bring a ‘Greek’ home, he must be an Alpha,” a smiling Warnessa states. “I was so desperate to prove her wrong, but when I got to college, I understood my mother all too well. As his namesake, an Alpha male was just that…the Alpha male. The strength of Martin Luther King and the smarts of Cornell West, Alpha men have proven themselves to not only lead a community but also a movement.

“I accept that there’s always a bad apple in a bunch, but I do admit that I look at (a) man differently and have different expectations when I find out that he’s an Alpha. I automatically see excellence. As leaders in many of the Black and non-Black organizations on campus and with (the) highest GPAs, these fraternity men (shout out to the Epsilon Iota Chapter) ice coldly ran the yard with intelligence, personality, community awareness, and care.

“These fraternity men are my ideal man to build a life with. And even though I have no preference, as I can respect any man that dedicates himself to the service of the African American community, the men of Alpha Phi Alpha Fraternity, Inc. have always stood out as having the most appeal.”

“Kappas appear to be the smooth, finesse men, but I put them in the category of not being able to settle down,” continues Leila. “Alphas are the most sincere, humble, and pleasant to be around. While not perfect, for my personality to date it seems like it would be a better fit, if I was just going off of which fraternity a guy is with.

“However we all know that what fraternity a man is in has really nothing to do with his personality and whom he is on the inside at least not 100 percent, but I am sure most men that join fraternities join the ones that better fit their personality.”

“The Alphas represent my ideal man,” continues Metra. “Fraternity men are awesome period, but Alphas are well-rounded and educated. They are the type you would want to bring home to meet your family.”

“Most of my friends love Omegas and I like them too because of how they present (themselves), but in my age group they act like straight dogs,” says Nikki. “I prefer an Alpha because of their mannerism and how they treat ladies. They are more focused on their future and their organization doesn’t make them. Who doesn’t want a man that can be independent, fun, good-looking, and has a future to look forward to?”