Ladies Give Their Definition of a Real Man 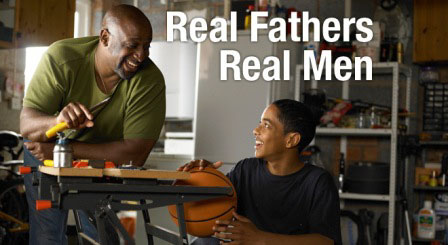 Many women say the definition of a real man is a man that handles his responsibilities to his lady and his children (Photo courtesy of BlackAmericaWeb.com).

The Definition of a Real Man

Have you ever been around a guy who claims he’s a real man, but his actions say otherwise?

He may claim to be a man, but you would actually define him as a boy, dude, guy, or sometimes a child.

What is the definition of a real man? It’s definitely more than being born a male. It has a lot to do with your character, the choices you make and the responsibility you take on, but what else?

What do you think really defines a real man?

As I chatted with some ladies about the definition of a real man they shared with me the wonderful examples of men from their own life that explains the definition.

“I had a father, but not a father-daughter relationship,” says Michelle. “He never really took the time to teach me anything or to help me mentally in life. I always felt like a fatherless child, until my stepfather came into the picture. Though he came in as I was an adult, married woman, it was still right on time.

“I went through a divorce and that process was hard for me, but my step dad helped me tremendously. I had never been told by a man that I deserved the best, that I was the best, and that I was amazing. I can’t begin to tell you how he singlehandedly changed my life.

“When I started dating again, he had a stronger opinion than my mother and I loved it, because I had never experienced that. After years of me forming a relationship with my step dad, I became complete, simply because of him. He is (the) true definition of a real man.”

Nikki chimes in, “My parents divorced when I was young, but my father was always there for me and my brother. When my husband and I want to get away he keeps our sons for us, and he’s a shining example to my boys. He and my husband are the definition of real men because they know the difference between being a baby daddy and a father.

“A man understands that it takes more than monetary compensation to care for his children. He wants to exemplify what his son(s) should be like when they become adult men and have children of their own. His life should be an example of how a man should treat his daughter(s) when they chose a mate.”

Choosing a mate is sometimes a difficult thing to do for the women of 2013. Why is it so hard? What are women looking for in a man that seems so hard to find?

“To me, the definition of a real man is a man who takes responsibility, owns up to his mistakes, and doesn’t run away when it gets rough. He needs to be a man that knows how to be head of household, knows the right way to put me in my place, and can stand on his own two feet with or without a woman. A real man doesn’t need a couple, a few, or several other women to be satisfied and happy.”

When most women meet a man they are interested in, they define him as being real if he knows how to date them, marry them and protect them.

When men hear the word protect they think women want them to jump in front of a bullet for them…not negating that thought either, but there’s more to the word protection.

“When a man protects me he makes me feel safe like I have no worries,” says Iyonna. “When I’m protected by a real man, I’m able to let my guard down and he can care for my heart with the sensitivity that’s needed, but yet be firm. Any real man can provide that even if it’s your brother, father, cousin, or husband.”

Sometimes the person that’s your only definition of a real man can come from someone you least expect it.

“My 10-year-old son is the definition of a real man, believe it or not,” states Kim. “My husband and I divorced and it seems like he divorced our son as well. He rarely came around and I was so worried about the effect it would have on my son, and it turns out, as a kid my son was worried and concerned with me.

“He tells me he loves me at least five times a day. He checks on me to make sure I’m happy, and if I’m not he will do anything to brighten my day. My son meets my dates to make sure they are good guys, and if he doesn’t like them, I’ve learned it’s for a good reason. I’m so proud of the man that he is at 10, and how he’s added to my life.”

To all the real men out there, the world owes you a huge thank you for building families, being a great support system, and being strong for so many.

To all the men who are the definition of a real man, you are loved, respected, cherished, and needed.