2011 Fathers of the Year: Will Smith, Dwayne Wade, Master P 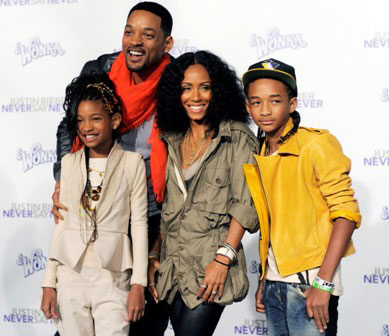 Will Smith is the epitome of a great Hollywood father (AP Photo/Chris Pizzello).

It has almost become commonplace.  Mainstream media chooses to focus on deadbeat African American fathers, ignoring the many excellent fathers who simply do their job as a parent with little fanfare or recognition.

However, in commemoration of Father’s Day, Regal Magazine presents its 2011 Fathers of the Year.

People honors the most beautiful people in the world and Ebony honors the most influential in Black America.  But it is high time that someone honors the Fathers of the Year (notice that it is plural, because there are way too many excellent Black fathers to honor just one) in Black America, and what publication is better suited to do that than the preeminent online magazine for African American men.

Dwayne Wade:  Putting aside the Miami Heat’s collapse in the NBA Finals and the controversial custody battle with his wife, Wade brings to the national spotlight the dynamic of the Black single father, a role many men in the Black community fill despite the lack of press coverage.

Many are familiar with the stereotypical Black single mother, who is mother, father and confidante to her children and we salute you as well, but what about the single father who is providing the same love and support as that strong single mother.

After separating from his wife in 2007, Wade claimed that he been unable to regularly see his children because of his ex-wife Siohvaughn Wade.  Claiming that he only wanted to be a part of his children’s lives, he fought for sole custody of the children and won.

“For me, it shows a lot of people that you need to fight to be in your kids’ lives sometimes.  You fight until you can’t fight any more.  That’s all I was trying to be, a father in his kids’ lives,” explained Wade.

And because of his fight and persistence, we honor Wade as one of our 2011 Fathers of the Year for bringing a celebrity face to the reality of many Black fathers who fight to stay involved in their kids’ lives, despite stereotypes that would suggest otherwise.

Master P: There is simply no limit to Master P’s dedication to his children and his dedication to being a positive role model for those who come from impoverished backgrounds like he did growing up in the Calliope Projects of New Orleans.

For becoming such a powerful role model, we salute Percy Miller as one of Regal’s Fathers of the Year for 2011.

Master P was recently interviewed by Mad Hatta of Houston hip-hop radio station KBXX 97.9 FM, where he criticized rappers Lil Wayne and Birdman for placing tattoos on their face, because that would scare corporate America and prevent them from securing lucrative sponsorship deals.

He added that if Wayne had stayed committed to receiving his college degree from University of Houston and avoided the criminal behavior that led to his incarceration; his wealth would be much greater than it is now.

Furthermore, he has criticized his brother and fellow rapper for naming himself C-Murder for the same reason he criticized Lil Wayne.  When P’s record label No Limit Records began receiving sponsorship deals from businesses like the shoe brand Lugz, those businesses were reluctant to include C-Murder, making it almost impossible to cross over into the pop world like P and youngest brother Silkk the Shocker.

C-Murder is now in prison for murder, which Master P blames on the negative people surrounding his brother.

Nevertheless, he has been able to impart that wisdom into his son Romeo Miller who is committed to being a role model through music and movies, as well as his daughter Cymphonique Miller who recently received her own television show with Nickelodean.

So in honor of your commitment to being a positive role model to your children and the children of the world, we salute Master P as one Regal’s 2011 Fathers of the Year.

Will Smith: It is said that a good parent is one that makes the lives of their children easier by opening doors for them, so that their life will not be as tough.  No Hollywood father epitomizes that more than Will Smith.

So for paving the way for the next generation of Smith entertainment icons (Jaden and Willow Smith), Regal honors Smith as one of our 2011 Fathers of the Year.

Despite criticism from writer Terry McMillan, who believes Will and Jada are “pimping” their children, parents are there to encourage children and help them reach their dreams.  Whether that dream is to be a Hollywood player or an All-Star little league soccer player, a great parent will do anything in their power to make those dreams a reality.  It just so happens, that the Smith family has much more power and visibility than the average parent and their children’s dreams involve being in the spotlight.

Talent is usually hereditary, just ask the Wayans brothers, so it is possible that entertainment is just in the blood of the Smith children, but it takes a real man to not only share the spotlight with his superstar wife, but also with his superstar children.

For that reason, we honor the Smith patriarch as one of Regal’s Fathers of the Year.

Furthermore, Regal takes great honor in providing another image of our great Black fathers, even those who are not household names.  We salute all of you!