Men Relive How They Proposed to Their Wives 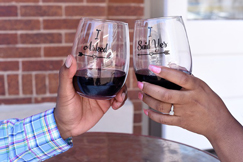 Most wedding proposals occur between the month of November and Valentine’s Day.

It’s Cuffing Season: Men Discuss How They Proposed to the Woman of their Dreams

Cuffing season is officially here, a time when getting serious about a relationship seems more appealing than playing the field.

Cold weather will do that to you.

Additionally, more couples get engaged from November to Valentine’s Day.

However, finding the right woman is not the only important decision, fellas.

Proposing in a way that you sweep your future wife off of her feet is equally important.

No one can tell you how to propose.

But people can tell you how not to propose.

The way that Martin Payne (Martin Lawrence) proposed to his girlfriend Gina Waters (Tisha Campbell) on the 1990s sitcom “Martin” should be out of the question.

Martin told Gina, you plotted, you schemed, and clank-clank, you finally got me.

Gina, I will marry you.

Are you happy now?

Other sitcoms from the 1990s like “The Fresh Prince of Bel-Air” did not provide any better ideas.

Death did that lovely couple apart before God officially brought them together.

But no one person has the proposal idea that is perfect for every couple.

Every couple is different, and each man should do what would be most memorable for their future wife.

But since it is officially cuffing season, RegalMag.com spoke to several men and asked them to relive the day they proposed to their wives.

Furthermore, RegalMag.com asked them if they had a chance to propose again, would they do it differently?

Check out their stories below.

Terrance Boyd (Houston): “I proposed to my wife at my own birthday party. I bought a blank card and wrote my proposal out inside it. I had my wife read all the birthday cards I received out loud and when she got to the last one I knelt down behind her. So by the time she figured out what was going on and looked back at me her face was covered in tears. I don’t know how I would do it now that we have smartphones and cameras. I’d probably try to do something that would go viral.”

Edward Davis (Houston): “I proposed to my wife at a Wednesday evening Bible study at Windsor Village (United Methodist Church in Houston). At the time we were starting to date heavy and see each other often, but still had our own places. As we sat and read the biblical lesson for the day, I waited for her to get distracted. So when she got distracted, I sat my spare house key in front of her with the ring attached. When she looked at it, she was still a little confused, but it was starting to kick in. I simply told her I was officially giving her the key to my house and the ring symbolized I was also officially giving her the key to my heart. Of course, she got all teary eyed and thought that it was the most amazing choice of words. I personally thought it was a bit cheesy. LOL. But definitely thought it was done in the perfect way…in the house of God acknowledging my intentions before my Heavenly Father first. Honestly, I would not change a thing. No need for a big and elaborate proposal. I saved all of that for the honeymoon, which was a week of getting spoiled and pampered in Jamaica.”

Giam Sigaud (Cooper City, Fla.): “I called ahead to the Renaissance Festival outside of Houston. I wanted to ride in on a horse and propose. That was not an option as someone had trampled onlookers a few years back. So I was transferred to the ‘Pirates’ who had a cove where ale and food was served. While people ate, they entertained the crowd with a show. I brought my…sister, a few friends and [my wife] Karri. In the middle of the show, the pirates proclaimed they could do what they wanted! They would auction off a fair maid to the highest bidder. I told my group to bid. Sure enough they pulled Karri up on stage. They proclaimed they needed to ‘qualify’ her—so they asked some questions: Are you over 18 years of age? Yes. Are you married or engaged? No…Ok then, they started the auction. My group began to bid! Karri was so embarrassed but playing along with the show. After a few bids, I walked onto the stage and told the pirate I wanted to disqualify her for the auction. I pulled out the ring and got down on one knee, and asked her to marry me. She was shocked, laughing nervously and in disbelief. She asked me if the ring was real? I said yes. She then said yes of course and in shock continued giggling. Everyone in the crowd cheered. What would I do differently? Not much. You can leverage a good proposal for life!!!!”

Mike Jones (Austin, Texas): “I got engaged November 8, 2015 in Paris, France. [My wife] Elizabeth grew up going to Paris and it was one of her favorite places to travel to. So as boyfriend and girlfriend at the time, we, along with her mom, sister and my brother planned a trip to Paris. My plan was more than fun. That is where I was going to propose to Elizabeth. Flying out there I had my brother carry the ring in his carry on in case the airport security needed to look inside the packaging and not to tip off Elizabeth of my idea. A couple of days after we arrived in Paris I went out by myself to ‘run some errands’ and scout out some places. Before the trip I had consulted with some dear friends that live there on some places to propose and some great restaurants to go out to and celebrate after. So, I had a short list of places to check out to see if they were a good fit for our special moment. The Eiffel Tower stuck out obviously, but I thought that would be too cliché for us and what I was wanting to do and for her obviously. After taking taxis throughout the city, I came to Pont-St. Louis, a bridge behind Notre Dame. It was a pedestrian only trafficked bridge where no cars were allowed. It has those old style European streetlights that lit the street up at night and I thought this was great and then we could walk to the restaurant I chose nearby to celebrate. That evening, I told her I wanted to take her out to a really nice restaurant that was a surprise. We got dressed up and ventured out and I had the taxi stop so that we could walk around since our reservation wasn’t for another 45 minutes to an hour from that point, and we walked around and I came to the spot where I thought had the best view of the water and the lights with Notre Dame in the background of her view and got on one knee and asked Elizabeth to be my wife. I pulled out the ring and she said yes and I put it on her finger. She was so nervous as was I and I thought she was going to drop the ring into the Seine River but thankful that didn’t happen. I found out later that she secretly always wanted to be proposed to on a bridge in Paris and I never knew that. So that was really cool. Then from there we called everyone…parents, grandparents and family and went to go celebrate just the two of us at the oldest restaurant in Paris that dated back to the late 1500s and had a great evening. I wouldn’t change any of it.