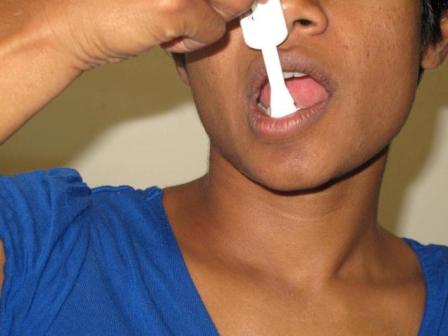 Standing up to H.I.V.

By Jeremiah A. Scates

Awareness is the matter and privacy counts according to Oraquick, a quick way to test for H.I.V. It’s time to stand up to H.I.V.

Oraquick is used to detect H.I.V. in the privacy of the home. Most, if not all individuals are terrified and embarrassed of hearing the results about the disease.

The test uses oral fluid which means no pain and less people are exposed to the virus. The test takes 20 minutes, which is already a major difference between the in-home test and clinic test.

Ron Ticho, Senior Vice President of Corporate Communications, stated that there’s urgency in this matter around all communities throughout the country. Individuals are stressed to find out their status and impatient as well.

“This type of test differs from a test at the clinic because individuals can get tested in the privacy of their own home, save time and convenience, and a 24-hour emergency kit comes with the test in case an individual tests positive for H.I.V.,” Ticho said.

Approximately 1.2 million people in this country are affected by the deadly disease and 250,000 are unaware according to the Centers for Disease Control (CDC). At least three years of perfecting the in-home test has been done by CDC to help reduce this number.

More than 1.1 million people in the U.S. are infected with H.I.V. and 232,700 don’t know it according to Orasure Technologies. These uninformed people are responsible for 54-70 percent of the 56,300 new cases annually.

H.I.V. has been killing our communities since a breakout in the early 1980s. Forty-seven percent of H.I.V cases in the United States are from African Americans according to The Body.com’s 2008 report.

But 75 percent of H.I.V. patients change risky behaviors after knowing their status according to Orasure.

“More people will be aware about their status with the in-home testing, but this doesn’t eliminate the virus,” Ticho said.

Ticho and Oraquick stressed that the test should be treated like a normal test and not used for results immediately after intercourse.

“I do want people to know the window period is three months, to see a health care professional, and no test is pursued after risky behavior,” Ticho said.

The Oraquick test has been distributed to more than 30,000 stores throughout the country and student health centers around college campuses. A large percentage of corner stores have the test also.

“The only negative, if any, will be (if) there no more tests to distribute,” Ticho said.

No other negatives have been detected or any side effects according to Oraquick and Ticho.

Scates is a contributing writer for Regal Magazine, a publication dedicated to the African American community