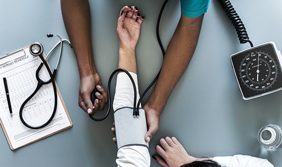 Many believe having more Black doctors and healthcare professionals would reduce alleged racial discrimination in the industry.

Working in a nursing home, she believed that White healthcare workers treated White patients a little better than they treated their Black counterparts.

When Smith voiced her displeasure to her superiors, she was met with disbelief and not empathy.

But where is the outcry for more African-American doctors and healthcare professionals?

Although reports of racial discrimination have decreased in recent years, many African-American patients report discrimination and subpar medical treatment based on race, appearance, socioeconomic status and other descriptors.

According to a Dec. 2017 MedicalXpress.com article, “The analysis by researchers at UC San Francisco, Stanford University, and UC Berkeley found that discrimination reported by Black patients declined significantly over the six-year study period, reducing the difference between Blacks and Whites from 8.2 percent to 2.5 percent.

“But by far, racial discrimination remained the most common reason cited by Blacks for receiving poor service or treatment from doctors and hospitals. In addition to race or ancestry, the survey asked by gender, age, religion, weight or physical appearance, physical disability, sexual orientation and financial status.”

According to TheHill.com, Blacks are three times more likely to die from asthma than Whites. Also, Blacks have a 25 percent higher death rate from cancer than Whites.

“If you are an African-American or Latino and you present to the emergency room with a broken leg or a kidney stone, for example, you’re less likely to be given analgesics at the recommended level,” said Tene’ T. Lewis, an associate professor of epidemiology at Emory University Rollins School of Public Health in Atlanta in a Feb. 11, 2016 article in U.S. News & World Report. “It doesn’t matter what part of the country you’re in, it doesn’t matter what type of place you’d present to, that we’ve seen fairly consistently.”

Some say that the solution to the problem is increasing the number of Black doctors practicing in predominantly Black neighborhoods. Sometimes Black patients cannot receive proper medical care because of location and transportation issues.

Many Black patients do not trust White doctors based on the Black community’s turbulent history with healthcare providers like in the Tuskegee Experiment from 1932-1972, when Blacks were not treated for syphilis, instead receiving a placebo, to see if penicillin could prevent, and not just cure the disease.

Many became blind, died and/or passed the disease on to wives and children because they did not receive treatment.

Syphilis became treatable with penicillin in the 1940s.

According to PBS.org, “A new survey has found implicit biases in medical students that may explain why Black patients are sometimes undertreated for pain, with some students believing that Black people feel less pain and have thicker skin than White people.”

While Smith believed she saw bias at the nursing home she worked at, those she accused of bias did not suffer the consequences of her complaint, but she did.

She began facing more scrutiny at work and had to leave the job.

As a result, some Black patients may have lost an empathetic caretaker, emphasizing the need for more Black Americans in the medical/healthcare industry.