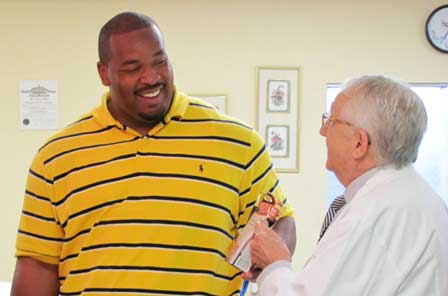 When one thinks of cookies, losing weight usually is not the next thought that comes to mind.  But that is exactly what is happening to patients of Dr. Stanford Siegal (creator of the Siegal cookie diet) such as charismatic defensive tackle Kris Jenkins of the New York Jets.

In May, vocal Jets head coach Rex Ryan challenged Jenkins and teammate Damien Woody to a weight loss competition to see who could lose the most weight before training camp.  Jenkins was recently announced the winner and he gives credit to the Siegal cookie diet, in addition to his competitive nature.

“I am a very competitive person so I’m not surprised that I won, but I can’t believe I won with the help of cookies,” said Jenkins who lost 33 pounds, compared to 26 pounds for Woody and 20 pounds for Ryan.

However, many people are winning the battle of the bulge with the help of the Siegal cookie diet.  Siegal began this program over 30 years ago in which he combines a “secret” blend of amino acids and proteins straight from his Miami bakery every night.

He states that the cookies effectively suppress hunger and at only 90 calories per cookie provide a delicious snack to those seeking to shed a few pounds.  However, Siegal advises to eat sensible meals to supplement the diet, preferably 300-800 calories per meal.

“Since 1975, (the Siegal cookie diet) has helped more than a half million people lose weight without hunger,” said Siegal.  “Given the countless fad diets that have come and gone, our longevity and patient success rate sets us apart and frequently attracts the attention of the news media.  The structure is very simple—when you’re hungry, eat a cookie.”

Even before Jenkins’ victory in the Jets weight loss challenge, over 200 doctors throughout the United States and Canada began offering products from the Siegal cookie diet to their patients.

Since the founding of Siegal’s medical practice in 1957, the 81-year-old physician has treated over 500,000 overweight patients.  He came up with the idea of the Siegal cookie diet after researching natural food substances that augment the hypothalamic control of hunger.  It is widely believed that the hypothalamus part of the brain plays a significant role in people feeling hunger.

The creator of the Siegal cookie diet was born in Pittsburgh in 1928, graduating from the University of Pittsburgh in 1950.  He went on to receive a D.O. degree from Still College (Des Moines University) in 1956 and limited his private practice to overweight patients in 1960.  Siegal earned his M.D. from University of California in 1962.

Jenkins and the Jets enter the 2010 NFL season as one of the favorites to reach the Super Bowl in Arlington, Texas.  If successful, do not be surprised to see the Siegal cookie diet making its rounds in other NFL locker rooms.