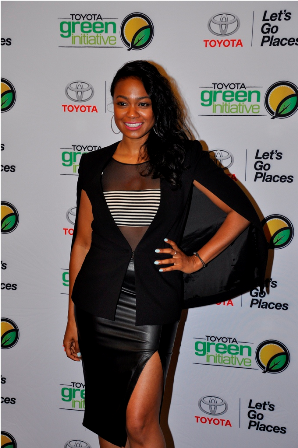 Giving Back to the Global Community

African American talent has always been known for giving back to their community.  From the activism of Paul Robeson, Harry Belafonte and James Brown during the Civil Rights Movement, entertainers have always used their celebrity status to elevate the Black community to new heights.

However, the current generation of African American stars has elevated their game and is now giving back to the global community as well.

Actors Tatyana Ali (“Fresh Prince of Bel-Air”) and Lance Gross (“Crisis”) have recently become spokespersons for Toyota’s Green Initiative, a program that encourages students, alumni and supporters of Historically Black Colleges and Universities to go green in their daily lives from conserving energy at home to driving fuel efficient automobiles.

“I do a lot of work in the community and I actually drive a (Toyota) Prius,” said Ali on a recent visit to the SWAC basketball tournament in Houston.  “I’ve actually been driving my Prius for the last five years, so it just seemed like a natural fit.  And I’m going more and more green with my life.  I love the fact that (Toyota sees) young Black people as trendsetters.  I like the empowerment that comes along with taking care of your environment.”

Gross, who also drives a Prius, has taken the Toyota Green Initiative a step further incorporating healthy eating habits into his lifestyle as well as energy conservation.

The Gross family has a history of diabetes and heart disease, so the Hollywood star has become health conscience in recent years, adding a lot of vegetables and juices to his daily diet.

Furthermore, the actor has seen Hollywood jump on the environmentally-friendly bandwagon in recent years with the way they distribute scripts to talent.

“(Actors) use so much paper (and) waste so much paper on scripts,” Gross told Regal Magazine.  “For a show we get a first draft, a rewrite (and) a shooting draft.  So now they’re moving in a direction…that they’re emailing scripts and that’s what it’s moving towards.”

And Ali told Regal Magazine that she sees Capital Hill moving in that direction as well, even though some are slow to admit to the reality of climate change.

Although Ali and Gross have not been invited to speak to Congress about the Toyota Green Initiative, Ali believes that the real power does not come from lobbyists, but from the people in the community.

While campaigning for President Barack Obama she learned that it takes a groundswell of popular opinion from the community at large to change the attitudes of politicians.

And Ali and Gross have no problem using their popularity to make a change in their community like their predecessors, and hopefully changing the community will eventually lead to inspiring others to change the world.