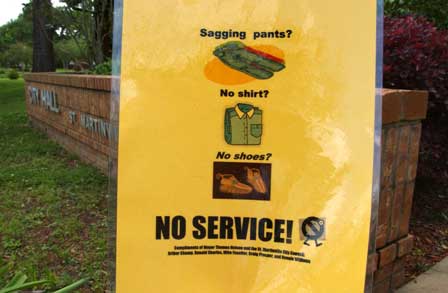 This City Hall refuses service to those wearing sagging pants/AP

In Eazy E’s 1988 classic song, “We Want Eazy,” former R&B sensation Michel’le asks the late rapper, “Hey Eazy, why you wear your pants like that?”  His reply was, “I wear my pants like this for easy access, baby.”  Twenty years later with sagging pants becoming a huge fashion trend nationwide, the follow up question should be easy access for whom?

The fashion trend that has become so popular in communities of color, probably as a result of the popularity and influence of the hip-hop culture, actually has its origins in prison culture.

According to Shamontiel, a blogger for Associated Content, “Sagging pants was never meant to be fashionable.  Prisoners wear their pants this low because belts are a popular way to commit suicide by hanging oneself, to hang others, or to use as weapons in fights.  Prisoners are also not allowed to have shoestrings for the same reasons.  But there is an even more obvious reason why pants are sagging in prison.  If the pants are below a man’s bottom, it is to introduce to other men that he is homosexual.”

The sagging pants trend has become so bothersome to many that several local governments across the country have banned or attempted to ban sagging, by issuing fines and even jail time to those who show their underwear or body parts as a result of sagging.  However, many opponents of the law say that these ordinances unfairly target African Americans by prohibiting them to freely express themselves through their attire.

As of August 2008, the Chicago suburb of Midlothian became the latest town to propose a law that would outlaw saggy pants that reveal rear-end cracks and underwear.

“We’re not talking about someone with low-slung clothing; we’re talking about when clothing is worn in such a fashion that displays body parts,” said Midlothian Police Chief Vince Schavone.  “It’s not just pants hanging, it’s if their pants are down.”

Asked if sagging pants should be banned, writer Leigha Gonzales replied: “Should saggy pants come to an end?  A definite yes to me.  Who cares about which type of underwear are worn or what rear-end crack looks like.  I assume that most individuals wear underwear whether it is a thong or boxing shorts.  Everyone has a rear-end crack!  Who needs to see that?”

However, some critics of sagging pants are also against making it a criminal offense and believe law enforcement should spend taxpayer dollars on initiates that reduce crime and not those that ridicule fashion.  An Associated Content blogger, who writes under the pen name mmog37, believes saggy trousers are just another rebellious fad for teenagers just life the jheri curl and bell bottoms, although she finds it offensive.  Writer Monique Finley believes that sagging pants are tacky, especially on a job interview unless that job requires such a dress code, but believes people should be allowed to wear whatever they choose without fear of police involvement.

“It is one thing for a school to have dress codes,” said Finley.  “It is a whole different subject for the City (Shreveport, La.) to issue ordinances which carry fines for citizens who are not breaking the law.  Having to pull up your pants shouldn’t be punishable.  If you just lost weight it should be celebrated.  Perhaps you can’t afford new clothing.  Clothing ordinances are plain and simply, a violation of citizens’ rights.  Business owners, government buildings, these places have the right to establish dress codes.  But I should be allowed to wear my baggy jeans in my front yard without fear of police harassment.”

Nevertheless, the issue of the prison culture invading the African American culture is at the heart of the sagging pants debate.  Whether one is for making baggy pants illegal or not, what should be agreed upon is the fact that it is time young people of color stop imitating the prison lifestyle and embraces the lifestyle of freedom and prosperity.  So whether it’s Eazy E speaking on his baggy pants in “We Want Eazy” or Run D.M.C. sporting Adidas with no shoelaces in “My Adidas,” it is time that the behavior and attire of inmates are shunned and not celebrated within communities of color.

To post your opinion on this issue visit www.regalmag.com/forum.