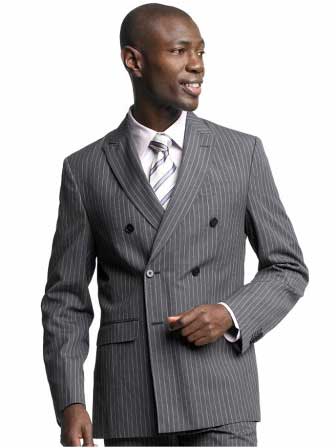 Double breasted suits can add a unique aura to your wardrobe (Photo courtesy of Zigoti.com).

Double Breasted Suits: Are You Up For the Challenge?

The trim of a guy’s suit has been known to turn heads.

Boosting confidence and pushing past arrogance, the way a man wears his suit epitomizes style, class and intelligence.

Every man has his preference, and I personally think every man should have a suit or maybe three. But which ones do you choose?

In all honesty, any guy can walk into a store and pick up a black jacket, a pair of slacks and a simple boring white shirt that screams the monotony of nine to five. But do you dare challenge yourself with the “new” or rather the old trend that is back on the scene? You know the double breasted suit that you wouldn’t be caught dead in because it revels in the world of old school, and thoughts of it make you feel like a complete 70s or 80s baby!

However, I have been checking out the double breasted suits recently, and I must say the fashionable style it has created is a plus in men’s fashion.

Five or more years ago I would have screamed no to the double breasted suit because it looked like something from a bygone era. Cheap car salesmen wore them as a badge of honor and the look of it was just horrific.

Although they were not appealing to some, they were a glimmer of hope for those salesmen. And although I didn’t see it, the look of double breasted suits would pour out more and more distinction as time moved on.

When trying to decide on a particular suit, short men look good in one button suit jackets, while slim guys carry an aura when wearing double breasted suits.

Suit shopping can be overwhelming for men just as shoe shopping can be an all day daunting task for women. But it doesn’t have to be a situation that you hate so much that it’s like watching paint dry. It can be simple and fun and very rewarding in the end.

Below I have included the simple dos and don’ts of wearing double breasted suits:

Add at least one killer double breasted suit to your wardrobe. Being trendy is great, but when trying to get noticed, the double breasted will quickly become your go to suit.

Skimp on tailoring. These suits project alpha-male confidence because they give you that powerful, athletic figure. A good tailor is crucial to nailing that fit.

Keep your jacket fastened until you sit down. Double breasted suits just look better when they are buttoned.

Don’t ever fasten the bottom button. Ever. Just don’t do it!

Let your friends’ jealous jabs throw you off your game. You’re killin’ it man!

Wear a double-breasted suit to the office, to dinner or to a bar. It’s appropriate in any situation where you’d wear a single-breasted suit. So don’t be shy.

So are you up for the double breasted suit challenge?